When all appears lost and the season is on the skids, thank god for the Cryin’ Illini. Even more than Indiana or Minnesota these days, Greek U is the one team on the schedule that is the equivalent to an uncontested layup, which in this case Bucky will make a slam dunk.

Oh Natey Scheelhaase, we love how you love you some Jesús Cristo. Why roll with a rosary or tattoo describing how only the almighty can judge you, when you can slap eye-black crucifixes under your eyes. Hey, as a quarterback, why not have the good lord guide your eyes to the open man.

It also makes you look like a g’damn criminal.

Natey, you’re upholding the tradition of Jeff George – that’s a big responsibility. We can’t have you looking like resident of Joliet State that’s turned a new leaf. 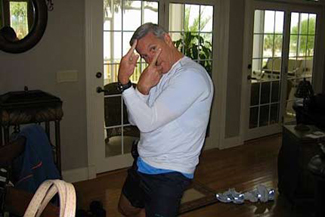 Damn you Illinois Athletic Director Mike Thomas and your cutthroat policies of "winning." While canning the Zooker and Bruce Weber may have saved you some face, think about the rest of us? Think of the countless gambling advantages knowing that, even behind – Illinois would blow the game.

It’s certainly old hat to make light that no other major D-1 program has done less with more over the past 7 years than Illinois, but the stats are simply fantastic.

llinois has 22 players currently in the NFL. In the last ten seasons, they’ve had 23 conference wins. In the last twenty years, Illinois has had two back-to-back winning seasons. The best coach in the last 30 years is noted jackass John Mackovic.

It's Simple. We're better than you.

To the casual eye, it doesn’t make sense. It should not make sense. How on earth has the University of Wisconsin built one of the most consistently powerful football and basketball programs in the Big Ten, while Illinois continues to languish in mediocrity?

With 7 million more state residents, lord knows how many more athletes and practically the same quality of facilities, Chief Illiniwek should kick our ass up and down the football field and basketball court every damn time.

The sad part is, Illinois –Wisconsin should be rivalry. Border states, pro-fan bases that already can’t stand each other.

But alas, no matter the coach, no matter the talent on field – Illinois simply can’t get their shit together. Which come tomorrow at 2:30, is perfectly fine at this blog.