Joel Stave left the field and Danny O'Brien came on, eventually overturning the result on the field and handing Wisconsin its second conference loss.

Oh god, no. At least, that was my first reaction seeing Joel Stave come off the field and Danny O'Brien snap on the pads. But after examining the second-half film one more time, I was surprised by what I saw. Sure, O'Brien didn't play his best, didn't check out of a few key plays. But what it came down to in the second half was a simple matter of Michigan State defensive coordinator Pat Narduzzi outcoaching the living bejesus out of Matt Canada. 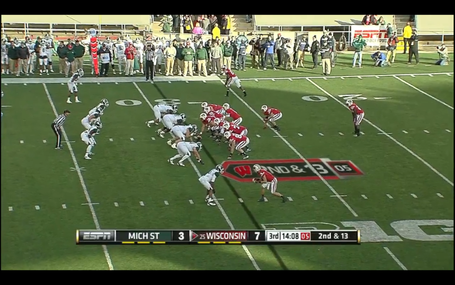 This 2nd-and-13 was one of the many 2nd- or 3rd-and-longs that O'Brien found himself faced with throughout the duration of his time in the game. Simple set here, strong left with Abbrederis split out and Melvin Gordon in the right slot, with Derek Watt and Montee Ball in the backfield. Michigan State counters with a 4-3, the cornerback up on Abbrederis and the other off of Gordon, knowing that most likely the running back will go in motion. Both safeties for Michigan State are off the screen because it's a 2nd-and-long -- they can live with the Badgers putting the ball on the ground with plenty of space to react, but it still prevents the long play. 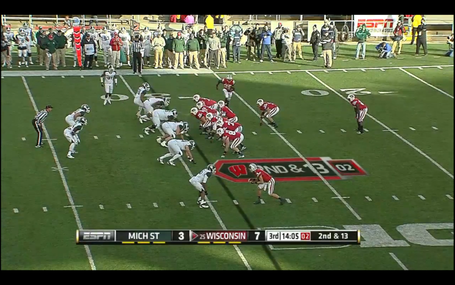 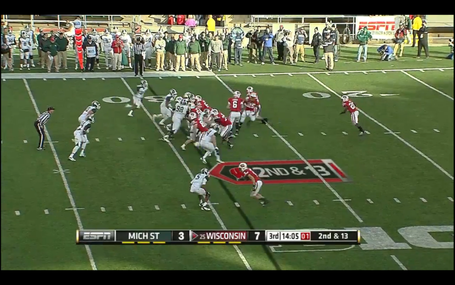 Now this is something I noticed, as well. I don't think O'Brien comes close to Stave's play action. There isn't really any selling of the end around here, as the left corner that was off on Gordon, rather than following him in motion, stays at home and keys on the run going off-tackle. See where his eyes are? He sees the ball in O'Brien's hand and because the fake isn't sold to any of the second-level defenders, the play is pretty much screwed from the get-go. Also, O'Brien didn't even look close to as fluid as Stave in this play, seemingly stumbling in his steps off the snap. 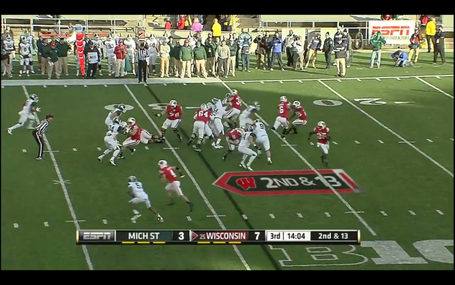 Cue me screaming at the replay...

Pretty much how this play ended up. Sure, the nine in the box were a result of it being O'Brien's first play and the call being a 2nd-and-long, but selling the play action like Stave at least slows down the penetration. Also, the offensive line got stalemated in the trenches. In the past, you could cover guys like O'Brien when the offensive line dominated like it has traditionally at Wisconsin. But in a year of inconsistencies, Wisconsin found itself in 2nd- and 3rd-and-longs all day, like this one. Yikes. 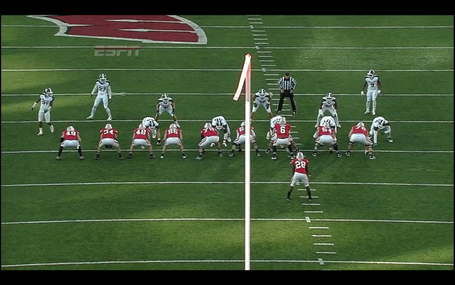 This is the one drive the Badgers actually got going under DOB. The down is a 3rd-and-1, and look at this bizarre gimmick formation. Unbalanced left, or you could really call it "wall left" as Sam Arneson (No. 49), Derek Watt (No. 34), Jacob Pedersen (No. 48) and Brian Wozniak (No. 85) line up on the line. Sure, it's nice to have players that can catch the ball in to keep the defense honest, but who the hell are we kidding? It's going to be a run play to the left and why not? The way MSU is aligned all Ball should have to do is run off somewhere to the left side...right? 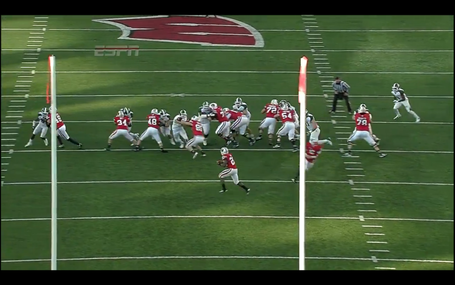 Good initial release here by the offensive line, but it looks like Wozniak is already blown up. 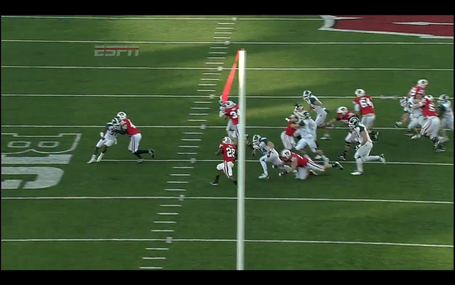 Marcus Rush (No. 44) almost blows up the play, but Ball manages to get a single yard. If Wozniak was able to even keep Rush held up any longer, Ball had the potential for at least 5-10 yards on this play. But still, a toss to the strong side on 3rd-and-1 gets just enough for the first down. Now, let's go to the other 3rd-and-1 on this drive.

I'm just going to give you the progression of this play and then diagnose it. Take a look and keep in mind, off to the right of this formation is Abbrederis and James White. 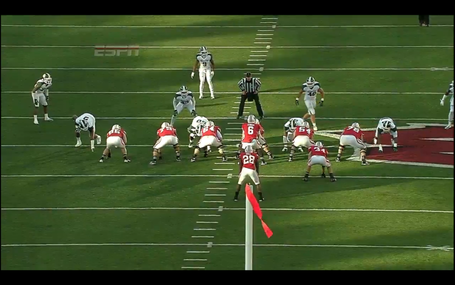 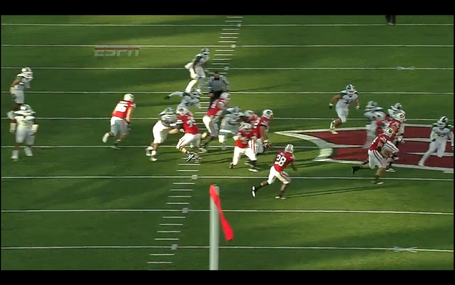 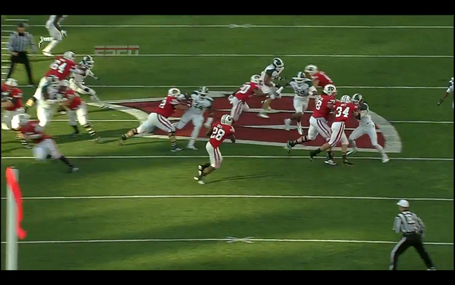 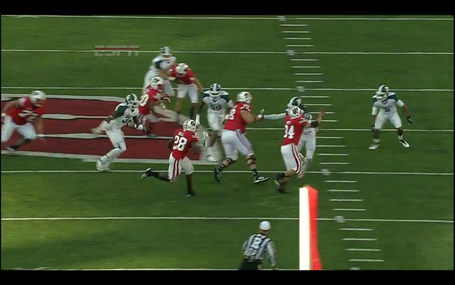 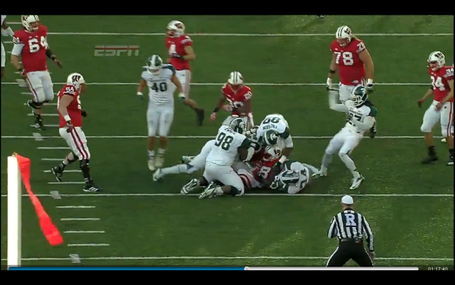 First off, O'Brien should have immediately checked off this play on the line of scrimmage. But that's what you get with a backup quarterback -- fewer game repetitions and weaker recognition in live action, especially since he only played the second half and had almost no time to recognize and adapt to MSU alignments. After the game, O'Brien told reporters he was a bit flustered with the blitzes and "tricky coverages" the Spartans were running. I mean if anything, the quarterback sneak right up the gut was open. Remember, it's just one yard.

On this play, Travis Frederick (No. 72) wasn't able to get out on linebacker Taiwan Jones (No. 34) and Watt and Rob Havenstein (No. 78) have some sort of miscommunication or mental mistake (not sure on whom) that results in a double-team on the outside, stopping Ball from trying to get the edge and making him cut back to where the help of the MSU defense lies. And White, (No. 20) who tries to lay a chip block on Jones to give Frederick time to reach the linebacker, pretty much whiffs.

Nine guys on the line of scrimmage for MSU, and DOB didn't have the confidence as the signal caller to get out of the call. Who knows what Stave would have done, but this past Saturday's game was ugly offensively.

In the next film study, I'll go over the blitz pickups of the Wisconsin offensive line with O'Brien behind center, which also reveals something that you might have missed upon first observation on Saturday.