Oh How I Hate Michigan State

Our least favorite team on the schedule comes to Madison.

Share All sharing options for: Oh How I Hate Michigan State

With its loss last week in Ann Arbor, Michigan State players and fans were guaranteed that for the 25th straight year, they would not be attending the Rose Bowl.

It feels good to know that as hard as they try, MSU is still sat at the teenager’s table of the Big Ten. No matter how many first round picks they produce, no matter how many billboards they erect, or how many thuggish-ruggish recruits they somehow finagle in to their institution of higher learning – they’ll have to wait another generation for a trip to Pasadena. 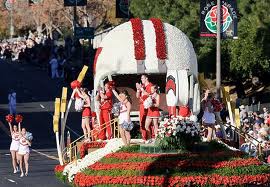 Much of the hoopla this week has been around the burgeoning Wisco-MSU rivalry, with its roots in the Ryan-Izzo battles and now with four straight years of classic football games. Suffice to say, any supporter of Wisconsin athletics can agree that we wish nothing but ill will, pain and suffering upon East Lansing.

It Starts at the Top 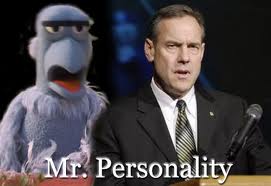 It is unprecedented how much unbridled animosity I hold against Sargent Shit-for-Grin Mark Dantonio.

Sure, Bretty B may not be the most liked coach in the Big Ten, but at least his jackassery has a frat boy, meathead feel to it. He gets ill-advised tattoos, falls in love in Vegas and will whip your ass in a case race. In political vernacular, he’s the guy you want to have a beer with.

Mark Dantanio will not have a beer with you. He does not like you. He is too focused. He is too stiff. If Mark Dantonio even had a beer, his heart would explode like a cartoon because he is a high-strung, self-righteous piece of shit.

College football coaches are supposed to be characters. Half hard-heads that love talking about "buckle up that chin strap, cause we’re coming after you" and half home-spun salesman. Starting with former loathsome Spartan Nick Saban, coaches became jackass, personality-less CEOs. Nobody personified this more than Jim Tressell, and falling right off his coaching tree is none other than Dantanio.

Cut right in the mold of señor sweater vest, I will be shocked (shocked!) if Michigan State is NOT under some kind of NCAA investigation in the next four years.

Sparty is a Pinup for Bears 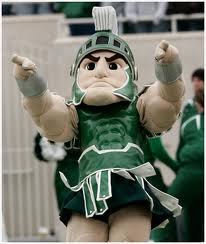 For the love of god Michigan State, drop the "This is Sparta" and all the "300" motifs with your marketing. It’s not cool or hip, nor does it engender you as a threatening adversary. While USC breaks out a classic, refined look and rides on a white horse, Sparty appears to be more at home at the Folsom Street Fair than a football field.

And while we’re at it, let’s end on a high-note. Screw Magic Johnson and his baseball team. Lupe Izzo – in the 92nd percentile of coaches wives. Charles Rogers will be living under a bridge by the end of the decade. Challenging West Virginia in Couch Burning is not attractive. Bo owns Izzo and does it with class. And oh yeah, Isaiah Lewis – keep running into that punter.