Film Study: A Quick Look at Northwestern vs. Minnesota

Breaking down the tape of Minnesota's 21-13 loss to Northwestern.

Share All sharing options for: Film Study: A Quick Look at Northwestern vs. Minnesota 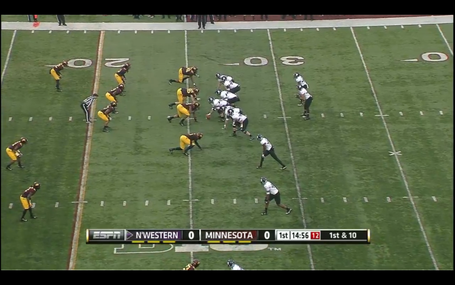 Following a Minnesota fumble on the opening kickoff, Northwestern takes over at the Gophers' 26 yard line. The Wildcats used a bit of hurry up offense on this first play, as the Gophers' 4-3 barely gets set in time. Notice the shading of the right outside linebacker. Almost directly over the defensive tackle with a slight shade to the right, there's a noticeably large space between the defensive end and defensive tackle. Coincidently, the Wildcats will attack the gap directly with a 45 option dive. Success on this play directly ties to a combo block between the center and right guard. If the center can find a way to control the defensive tackle, then the guard will be able to release onto the next level, blocking the right outside linebacker and opening the run up for a big gain. And that's exactly what happens. 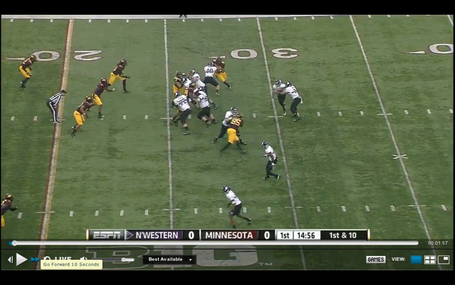 This picture shows exactly why the play works. There was so much space between Minnesota's outside linebacker No. 57 Aaron Hill and the line of scrimmage that it gives time for Northwestern's left guard, No. 72 Brian Mulroe, to chip off his combination block with the center on Gophers defensive tackle No. 99 Ra'Shede Hageman while the left tackle Patrick Ward just seals the hell out of defensive end No. 95 D.L. Wilhite. 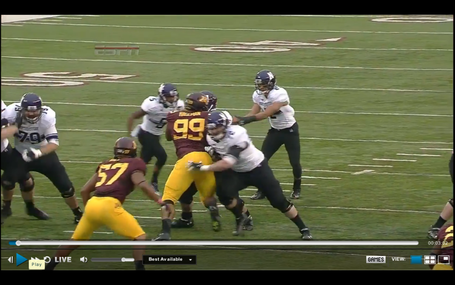 Here's a great shot. As a former offensive lineman, this kind of execution on a combo block brings a tear to my eye. Gophers linebacker No. 57, Aaron Hill, has his eyes on Venric Mark (No. 5), so he loses track of the big hog Brian Mulroe (No. 72) coming to seal him on the left as he chips off his combo block to reach the second level, springing Mark for a huge gain. 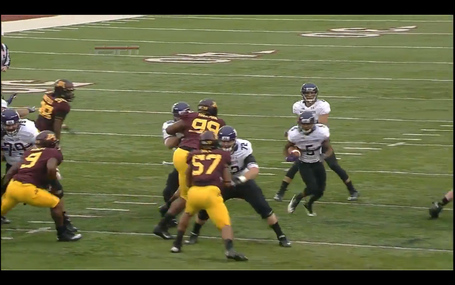 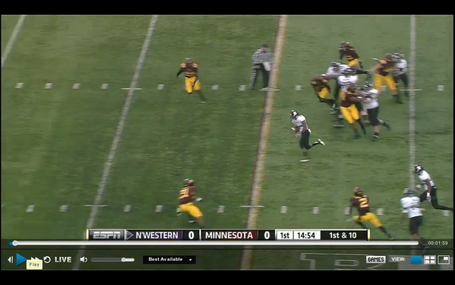 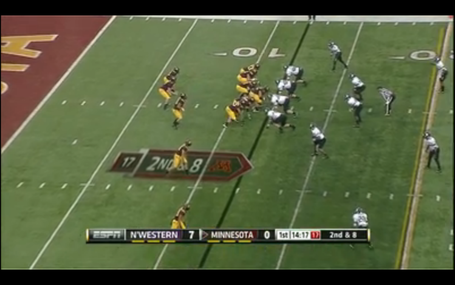 With MarQueis Gray out of the lineup, Minnesota goes with sophomore Max Shortell at quarterback. Albeit, a far less dangerous playmaker than Gray, the Gophers will still run the same shotgun-spread, option-read offense. In this play, we see Minnesota run a designed quarterback-read draw. Shortell doesn't have the raw speed and athleticism of Gray, but he can still make plays with his feet. On this play, Minnesota comes out in shotgun with two wideouts to the right and a tight end in motion to the right side of Shortell. Norhwestern counters with a 4-4 fit. 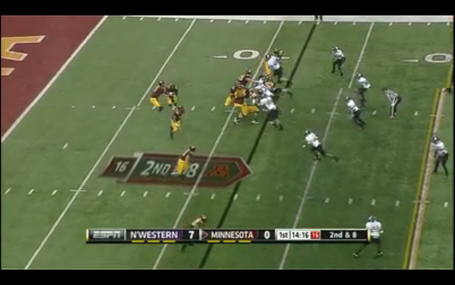 As is important with any option-read in the shotgun, everything depends on what the quarterback sees from the defense. With his eyes locked onto the linebackers, Shortell recognizes the linebackers are cheating towards his right side, mostly due to the fact that the tight end looks like he going to serve as a lead blocker for a handoff to the running back off-tackle right. Shortell does a good job holding it in the gut of his back, effectively selling the handoff and buying him precious hundredths of a second to get a solid jump on the linebackers, who have their eyes on the ball, not Shortell. 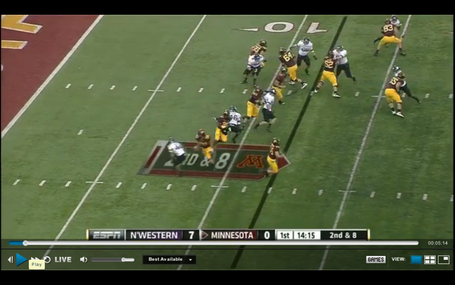 Northwestern's outside linebacker, Damien Proby (No. 46) gets drawn inside on the fake, as the other linebackers are sealed off by Minnesota's offensive line as the fake slows the linebackers reaction, giving the offensive line the critical time they need to reach the second level. Shortell's speed only limits him to a 10-yard gain, while this play with Gray in could have been six points. 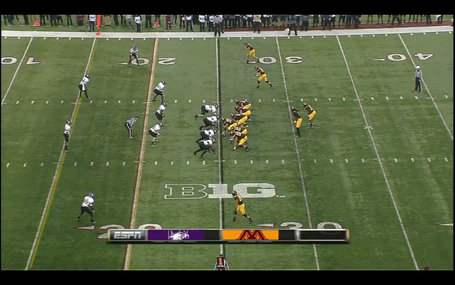 Now MarQueis Gray is at quarterback. Big difference. Remember, with a guy like Gray you have two options for outside contain. One, use your defensive ends to keep outside containment on the edge. Two, fit your outside linebackers to get the edge on contain. There's a third option of having a cornerback keep contain, but with the speed of these athletes on offense, it's not really a viable option. 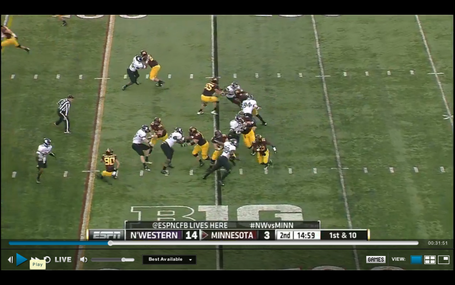 Oh great, missed tackles. Keep in mind, Gray is 6-foot-4, 250-pounds. In fact, Wisconsin head coach Bret Bielema remarked in his Monday press conference that Gray was a "lean, mean, fighting machine." And Gray shows why here, shedding two would-be tacklers to break a play that is seemingly dead into a touchdown. 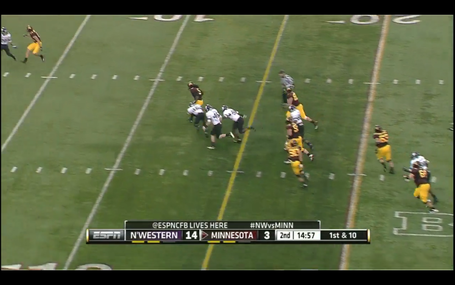 And when Gray gets in the open field, even when he's hobbled, it's still the same story. Broken tackles, speed, power... 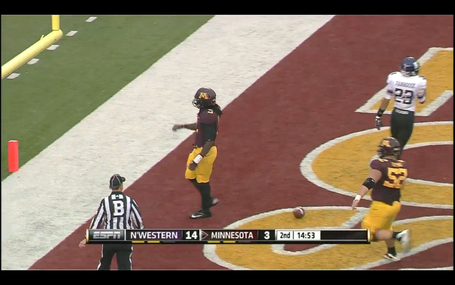