The Axe is nice. The rivalry is not.

This column is supposed to come from a dark place of hate, and I’ve finally found the extremity. From the bottom of my bleak heart, I can truly say I hate this week.

I hate the state that gave us Bachman, Franken and Ventura. I hate their accent, I hate Kent Hrbeck and I hate their faux, bullshit good natured attitude. But to the citizens of Minnesota, you know what really gets Wisconsin fans blood curdling?

It’s the assertion that you -- yes you UMTC -- are in fact our most hated rival. (Agh whore, seriously?)

Just writing that makes me want to yack on my keyboard. Sonofabitch Minnesota! Do you seriously know how hard Pat Richter, Barry and a cast of thousands have worked, clawed, scratched and sacrificed to make Wisconsin an elite football program? This is Division I football at its highest, most competitive level. "Competitive" is something Minnesota strives to be, and yet fails miserably with expected consistency. 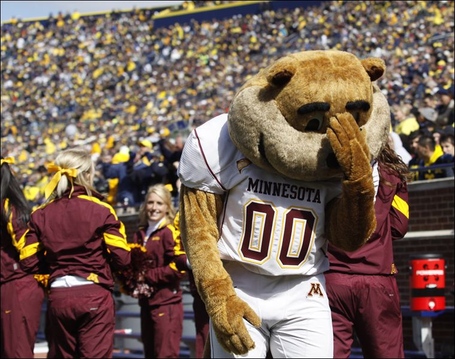 When the Legends and Leaders divisions were announced, our collective Badger Nation prayed and begged that we could get Nebraska as our "guaranteed" cross-division game. Oh, think of the glory of old vs. new tradition, the fired up fan bases and venom that could have been on display for a guaranteed national television audience every god damn time.

But no, instead we get the piss-poor program that is Golden Gophers and that god-forsaken axe.

We want a real rival! We are desperate for a real enemy! Can’t we just change Whitewater’s name to "Wisconsin State" and play them every year? At least we’d be have the ability to scream "Fuck State" at someone and know they’d spit it right back at us.

But as long as we are stuck with you Minnesota, could you at least do us the courtesy of stepping your game up, just a little bit?

You have a big, nice, clean major metropolis to woo recruits with. Yet you consistently get your pocket picked of your best in-state talent (Larry Fitzgerald), and you get the table scraps of the speed states. (Also worth noting Madison steals your smartest, best looking and most affluent high school students every year around college application time.) MarQueis Gray is a destitute version of Tavaris Jackson.

You have a pristine, brand new state-of-the-art stadium and a quarterback with amazing athletic ability. Yet TCF Bank Stadium is consistently 60 percent full.

So now that this lousy excuse for a rivalry comes to it’s climax, why don’t we just settle down, relax and watch some YouTube.