One last look at key plays from Saturday's 38-14 win over the Boilermakers.

Share All sharing options for: Film Study: Initial Minutes of Wisconsin vs. Purdue 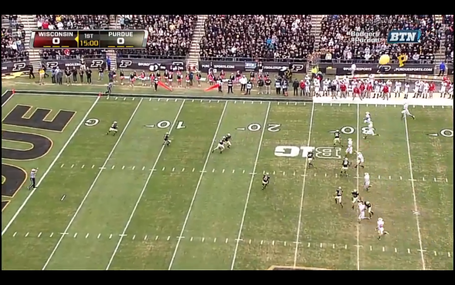 Wisconsin's kickoff coverage woes have created a theme that has carried on from last year. Nowhere this season was it more evident than against the Boilermakers in West Lafayette, Ind., this past Saturday.

This first screen shot is the initial look of the coverage. Receiving for Purdue is Akeem Hunt, the secondary return man for the Boilermakers. Initially, the Badgers are tight in their lanes with the outside men on the sidelines staying disciplined within their lanes of coverage. But this promising look quickly turns sour in our next frame. 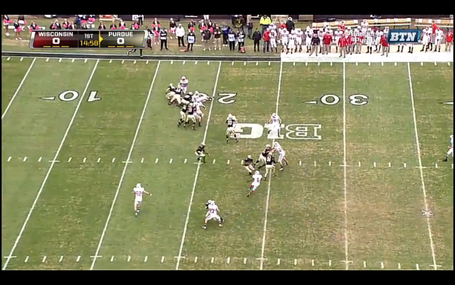 Great. The Boilermakers have laid a solid wall of blocks from almost every direction, giving Hunt a plethora of cutback lanes on this 44-yard return. The only men that look like they can make a play are the Badgers' Darius Hillary (No. 5) and Michael Caputo (No. 7). But, Hunt makes a read and recognizes Hillary coming to cut him off at the middle wall, planting his feet to cut to his right. The rest, well, that's where it gets ugly. 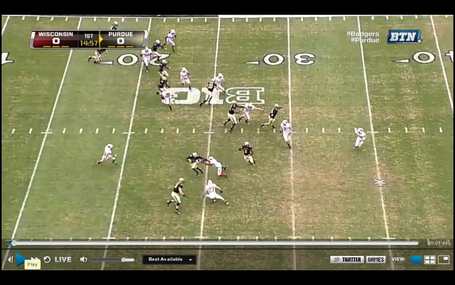 Darius, no! This is a tackle that has to be made, and Hillary simply doesn't bring Hunt down, allowing the return to continue rather than be over at the Purdue 25. So, simply, a bad angle and a missed tackle doomed the Badgers on the first return. Now....on to that first offensive play for Purdue that followed the return. 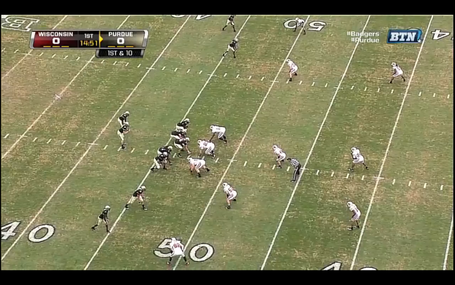 Notice anything strange? Try the bottom left corner of your screen. Yep, that's defensive end Pat Muldoon sitting out in the flat. This appeared to be some sort of gimmick play, but the Badgers only rushed three while the Boilermakers have twins both right and left. Linebackers Mike Taylor, Chris Borland and Ethan Armstrong are all in, meaning most likely the coverage the Badgers are in to be zone. After all, it's a bit unrealistic to think the Badgers expect three linebackers to play man coverage. With three safeties deep, the Badgers will most likely have their backers playing middle zone. 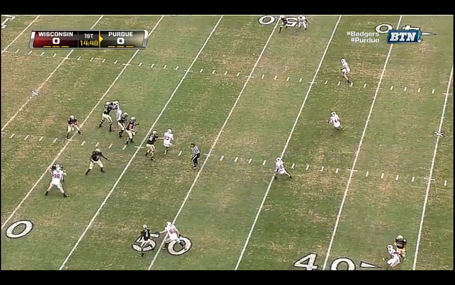 No surprise here. Muldoon does a surprisingly solid job covering Purdue's Gary Bush in the flat. But the Badgers are indeed playing a zone and just rushing three. So, with all three linebackers in coverage it means there are two safeties covering the deep route off-screen. But, with only three defensive linemen rushing and no visible threat, Purdue quarterback Caleb TerBush has all day to allow not only the deep-route to develop, but also make the throw virtually unopposed. Great. 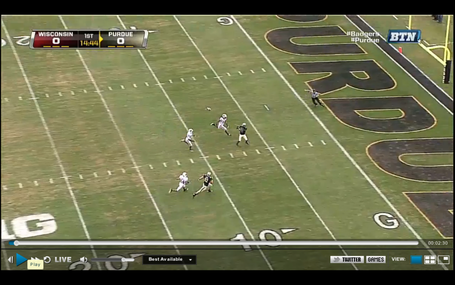 This image speaks for itself. Antavian Edison sneaks behind Wisconsin safety Dezmen Southward and defensive back Michael Caputo for a 44-yard gain, putting the ball at the 1-yard line and setting up a TerBush sneak for a touchdown, pushing the Boilermakers up 7-0 before a single minute was wasted in the game. Not the start a stout Badger defense, which is still aiming for a game where it limits every big play, had envisoned. 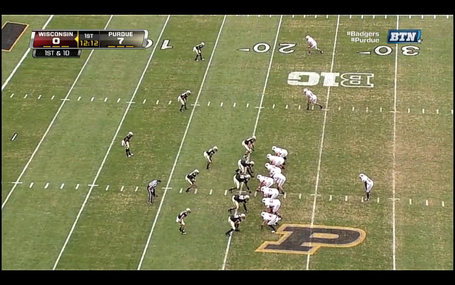 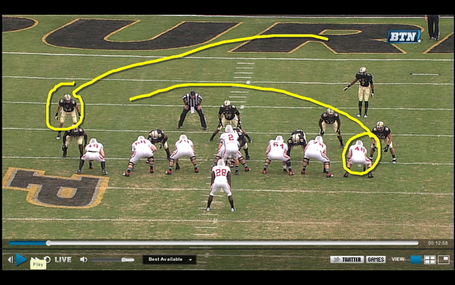 Two drag routes between Sam Arneson (No. 49) from the left and Jacob Pedersen (No. 48) from the right succeed in confusing Purdue linebackers in man coverage. 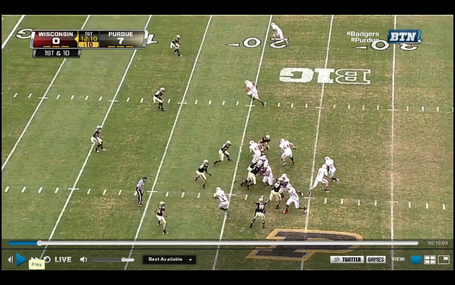 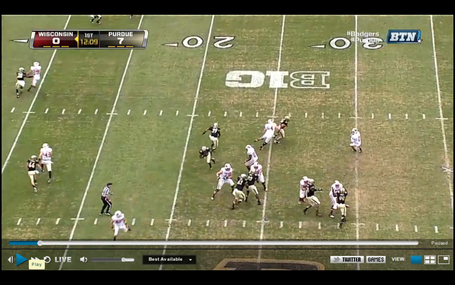 And it's too late once the linebackers recognize what's going on, as Pedersen finds himself wide open after an unsuccessful Purdue gamble and a great play call by Wisconsin offensive coordinator Matt Canada. 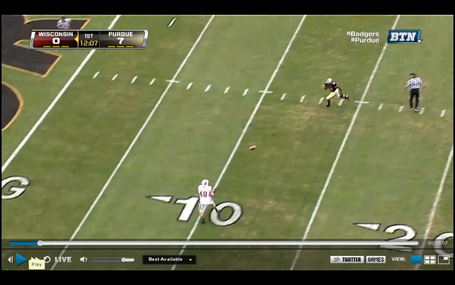 Yep. Wide open. 7-7 game, and not even three full minutes in.