Badger Bits: Nebraska and Wisconsin get it done with the run

Share All sharing options for: Badger Bits: Nebraska and Wisconsin get it done with the run

The Nebraska Cornhuskers receive their true initiation into the Big Ten Conference this Saturday at Camp Randall Stadium. Much has been made of whether or not Nebraska can adjust to the style of football played in the Big Ten. The Huskers' old conference, the Big 12, was filled with teams sporting talented quarterbacks and finesse offensive attacks. The Big Ten boasts a few teams with spread offenses as well, but power football is the name of the game here. The teams with the most success are the ones that dictate a game with staunch defense and overpowering running games.

Fortunately for Nebraska, they already have the defensive chops needed to succeed in the Big Ten. Defensive tackle Jared Crick will be a force in the middle for the Blackshirts. (Crick will play this Saturday.) Cornerback Alfonzo Dennard is a talented cover corner and will make things difficult for Big Ten quarterbacks. However, it's not clear that these Cornhusker defenders have ever faced a running game as powerful as Wisconsin's. They will need to be ready to play some physical football, or it's going to be Badgers/Buckeyes 2010 all over again.

Wisconsin's defense will also have to prepare for an efficient running game, however. Wisconsin and Nebraska are tied for second in the country for rushing touchdowns this season with 16 each.

Seven of the Huskers' touchdowns were scored by sophomore quarterback Taylor Martinez. Martinez and junior running back Rex Burkhead have nearly identical statistical lines- 420 yards on 63 carries and 7 TDs for Burkhead. Martinez has one more yard on the same number of carries.

Wisconsin's defense has been excellent at stopping the run so far this season, allowing only 88 yards a game. Only one rushing touchdown has been surrendered all season, but the competition was shaky, to put it nicely. If the Badgers can stop the run just as effectively against Nebraska (an incredibly big if), then they will be in great shape. Forcing Taylor Martinez to beat them with the pass is the number one goal. But you've also got to account for Martinez's scrambling ability, which can be a frightening prospect. It's really up to the Badgers to bottle up Martinez much like they did Ohio State's Terrelle Pryor last season. I'm willing to guess that the team that has the most rushing yards at Camp Randall on Saturday will be the team that wins the game.

Cool story about Wisconsin's black helmet back in 1969. It was given to a defensive player who proved himself to be the most aggressive player of the unit.

It has been suggested that this Saturday's game in Madison is the biggest matchup between two Big Ten teams since #2 Michigan vs. #1 Ohio State in 2006. What do you think?

Alec Lerner needs to work on not hitting his kickoffs out of bounds. But to be perfectly honest, I will gladly stomach him kicking a bunch of balls out of bounds, because that will mean the Badgers are scoring lots of points. Lerner's from Nebraska, by the way.

Nebraska's modus operandi this week is treating this game as if it's not as big of a deal as everyone is saying it is. But the Huskers would be wise to perform extra mental preparation for the crazed atmosphere that awaits them.

Russell Wilson lands at fifth place in SI.com's latest Heisman watch. Apparently Baylor QB Robert Griffin is ahead of him because he punted last week or something.

Rivals.com did a cool question and answer with Wisconsin's own Bret Bielema. He talks Russell Wilson, being in Barry Alvarez's shadow, and gives some praise to Antwaan Randle El.

Max Sternberg at the Daily Cardinal says that the Wisconsin defensive line has done its job so far this season.

Okay, so you might not be in basketball mode, but OBScho over at BT Powerhouse previews the Badgers' conference slate. Less Purdue and more Nebraska would be how I would describe it.

Finally, a sentiment echoing throughout Madison this entire week: 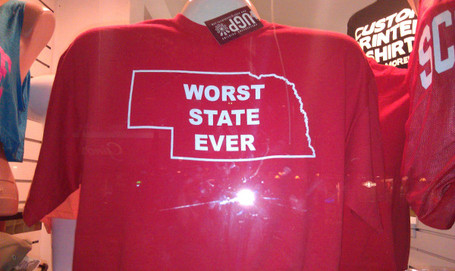