Happy Friday, everyone! Just a quick note before we get started- I wanted to let you all know that this will be my last regular Badger Bits post. As of next Monday, I am moving into full-time coverage of the Badger football team for B5Q, so a new contributor will be taking over for me. I'd like to thank all of you for reading and commenting over the last year or so, and I'm looking forward to helping B5Q grow even more in the next year.

I've thrown the idea around, jokingly of course, that all a Badger quarterback really has to do is hand the ball off on almost every snap. But hey, if a quarterback can hand the ball off well (or trick the opposing defense into thinking he did,) all the better for the Badgers. Well, according to Tom Mulhern Russell Wilson is pretty darn good at fooling other teams.

Wilson takes ball fakes to another level, often running full speed after a fake to try and lure a defensive end towards him. Also, ESPN statistics gave Wilson a 158.7 passing efficiency rating after a play action pass, as compared to a 114.1 rate with no play action. He also completed 64 percent of his passes with play action, compared to 57.2 without. Since play action passing is such an integral part of the Badgers' offense, I am having trouble thinking of ways Wilson doesn't fit his new team. Time will tell, of course, but it certainly looks like the Badgers have the right man for the job.

Tom Dienhart of Rivals.com thinks the addition of Wilson make the Badgers the Big Ten favorite.

Travis Miller of Hammer and Rails predicted every game for every Big Ten team this year, so we might as well just skip right to basketball season. I kid, I kid. Go easy on the Purdue folks- they just can't seem to catch a break.

The Badgers are using Ray Ball's massive size to their advantage on the offensive line, where Bob Bostad says he wishes the could use five tackle-sized players all the time.

The relative health of tight end Brian Wozniak might allow the Badgers to redshirt all three freshmen tight ends this year. Wozniak has been backing up both the tight end and H-back positions this fall.

The Badgers are planning on a 10 man rotation on the defensive line this year, according to Jeff Potrykus.

Potrykus also writes that the Badgers' coaching staff is encouraged by a (mostly) healthy camp from wide receiver Nick Toon.

In his blog for the Milwaukee Journal-Sentinel, Dave Heller writes about a few bowl predictions, as well as the first prediction for the season-opener against UNLV.

AB Golf Designs has created special golf head covers featuring everyone's favorite mascot- Bucky Badger! If you're in to golf, you can order the new design online from their website here. 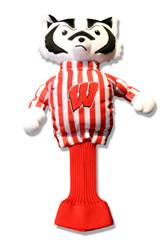