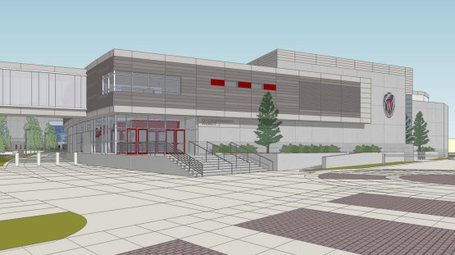 If you guys read Bucky's 5th Quarter on a consistent basis you know that John Veldhuis posts Badger Bits almost every morning with links on stories with Wisconsin ties from around the web. I'll be adding my personal touch with a hockey specific Badger Bits whenever I feel the need. It won't be on the front page but just in the Wisconsin Badgers Hockey portion of the site. Basically it will be the same thing I used to do on Sixty Minutes with the Link Roundup.

Currently the men are forced to drive to the Bob Johnson practice facility off campus which can be a hassle. LaBahn arena will be situated right next to the Kohl Center and the players can now use the same locker room that they use for games at the Kohl Center for practice at LaBahn.

- Brad Navin (Waupaca HS), Joseph LaBate (Academy of Holy Angels), and Jake McCabe (USA NTDP) have all signed their letters of intent to be members of the Wisconsin hockey class of 2011. They join Tyler Lapic (Chicago, USHL), Brendan Woods (Muskegon, USHL), Matt Paape (Sioux City, USHL), and Joel Rumpel (Penticton, BCHL) who signed letters of intent in the fall. The only known committed player who hasn't signed an LOI yet is Benilde St. Margaret's defenseman Patrick Daly but I would assume that will be coming soon.

- The OHL draft was last weekend for 1995 born players. 3 players from Wisconsin were selected. Hudson's Ian McCoshen was taken by Saginaw (6th round). Sun Prairie's Will Butcher was taken by Windsor (10th round). And Hudson's Travis Wood was taken by Erie (11th round).

McCoshen plans to play for Waterloo (USHL) next year, and Butcher has signed on with the NTDP. Wood, despite being taken last out of the three is the most likely to play in the OHL and I'm told it's a really good chance that it happens. He's only a freshman in high school right now so he'll likely be back with his HS team next season (Hill Murray in the cities)