Plenty at stake for Badgers in Indianapolis

Share All sharing options for: Plenty at stake for Badgers in Indianapolis

On the surface, it might not seem like there was a whole lot at stake in Wisconsin's 93-65 loss at Ohio State. The Badgers merely fall to the No. 3 seed in the Big Ten Tournament and arguably get a better draw, playing last among all the teams, while getting the winner of Penn State-Indiana.

Unfortunately, getting blown out in Columbus certainly didn't help UW's seeding in the NCAA Tournament. The Badgers likely entered the game as a No. 3 seed, but are almost certainly a No. 4 now after taking such a beating. And as we have learned with Bo Ryan's teams, it's often the luck of the draw that helps or hurts Wisconsin. Getting the highest seed possible is in the Badgers' best interests.

That's why, along with playing for the Big Ten Tournament Championship, Wisconsin can greatly aid its chances of going far in the NCAA Tournament with a strong performance in Indianapolis next weekend.

We've talked a lot about the Badgers possibly playing its second and third round games in front of its own fans in Chicago, but those chances weren't helped by Sunday's outcome. The Badgers need to be ranked higher than either Notre Dame or Purdue by the NCAA Selection Committee -- not the AP or coaches polls -- to play in Chicago and they failed to take advantage of Purdue's loss at Iowa Saturday.

Still, UW and Purdue could clash in the Big Ten Tournament Semifinals this weekend and a win over the Boilermakers might be enough to pass them up. The bottom line is that Wisconsin has to at least get to the Big Ten Championship Game no matter who they play to get there. If Purdue loses in the quarterfinals, that would actually help the Badgers more than if they beat them head-to-head in the semis.

Win the Big Ten Tournament, and the Badgers could climb as high as a No. 2 seed and play in Chicago. Lose in the quarterfinals again -- like the last two seasons -- and Wisconsin could be as low as a No. 5 seed playing in Tuscon with a much tougher path to the Sweet 16.

You can see how critical it is that the Badgers perform well in Indianapolis. 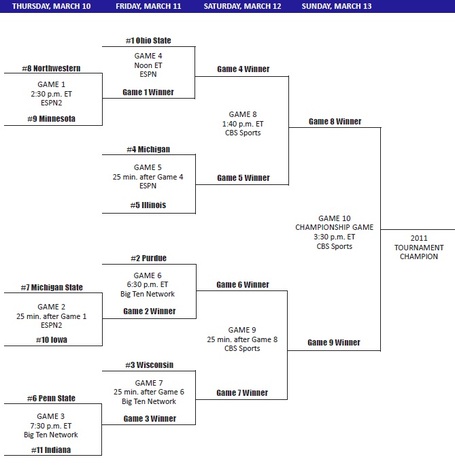 PLAY THE MARCH TO THE CHAMPIONSHIP GAME AND YOU COULD WIN A TRIP FOR TWO TO LAS VEGAS! LOOK FOR THE CODE INSIDE SPECIALLY-MARKED PACKAGES 12-PACKS OF BUD LIGHT ENTER CODE AT FACEBOOOK.COM/BUDLIGHT ----- No Purchase Necessary. Open to U.S. residents (except CA & TX) 21+. For a chance to win a Grand or First Prize, Game Period 1 begins 3PM CST on 2/14 & ends 3PM CDT on 3/18. For a chance to win a First Prize only, Game Period 2 begins 3:00:01PM CDT on 3/18 & ends 3PM CDT on 4/30. To participate, obtain a Code from inside specially-marked packages of Bud Light beer or to request a Code without purchase, visit budlight.com/freecode during a Game Period. Limit one (1) free Code request/day/person or email address. To play, text HOOPS to BEERS (23377) & follow prompts or visit budlight.com/freecode & follow instructions. See Official Rules inside package or at budlight.com/freecode for complete details. Void in CA, TX & where prohibited. Enjoy Responsibly – ©2011 Anheuser-Busch, Inc., Bud Light® Beer, St. Louis, MO