Big Ten Tournament Bracketology: Badgers could still get No. 1 seed

Share All sharing options for: Big Ten Tournament Bracketology: Badgers could still get No. 1 seed

Keep in mind that most teams still have two games this week and the seedings could easily change. This is how the bracket looks today: 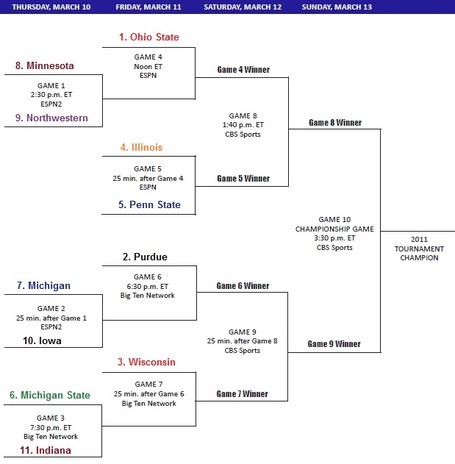 For reference, here's a link to the Big Ten tiebreaking procedures.

Technically, It's still possible for the Badgers to win a share of the Big Ten title and get the No. 1 overall seed in the Big Ten Tournament, but they need a lot of help. Ohio State travels to Penn State Tuesday night, which is no gimmie considering how well the Nittany Lions have played at home this year. If the Buckeyes were to lose, that would give the Badgers a chance to pull into a tie with Ohio State in Columbus Sunday.

The problem is that a Buckeye loss tonight would open the door for Purdue to possibility win the Big Ten outright if the Badgers pulled out the win Sunday as well. The Boilermakers host Illinois and go to Iowa this week. Quite frankly, it's hard to see them losing either game and Wisconsin would need them to lose at least one of them to earn the No. 1 seed.

But let's consider a three-way tie between Ohio State, Purdue and Wisconsin, which could only happen if the Badgers beat the Buckyeyes Sunday. That would give UW the tiebreaker because they would have a 3-1 record against the Bucks and Boilers. Purdue would get the No. 2 seed with a 2-2 record and Ohio State would fall to the No. 3 seed with a 1-3 record.

Of course, the Badgers could lose Thursday at Indiana and none of this would matter. The good news is that Wisconsin has already clinched at least the No. 3 seed.

PLAY THE MARCH TO THE CHAMPIONSHIP GAME AND YOU COULD WIN A TRIP FOR TWO TO LAS VEGAS! LOOK FOR THE CODE INSIDE SPECIALLY-MARKED PACKAGES 12-PACKS OF BUD LIGHT ENTER CODE AT FACEBOOOK.COM/BUDLIGHT ----- No Purchase Necessary. Open to U.S. residents (except CA & TX) 21+. For a chance to win a Grand or First Prize, Game Period 1 begins 3PM CST on 2/14 & ends 3PM CDT on 3/18. For a chance to win a First Prize only, Game Period 2 begins 3:00:01PM CDT on 3/18 & ends 3PM CDT on 4/30. To participate, obtain a Code from inside specially-marked packages of Bud Light beer or to request a Code without purchase, visit budlight.com/freecode during a Game Period. Limit one (1) free Code request/day/person or email address. To play, text HOOPS to BEERS (23377) & follow prompts or visit budlight.com/freecode & follow instructions. See Official Rules inside package or at budlight.com/freecode for complete details. Void in CA, TX & where prohibited. Enjoy Responsibly – ©2011 Anheuser-Busch, Inc., Bud Light® Beer, St. Louis, MO