Greetings from American Airlines flight 1155 with service from Chicago to Los Angeles. Internet on airplanes is truly awesome.

Yesterday we broke down Oregon's zone read offense and today we're going to take a look at the Ducks' 3-4 hybrid defense as well as their apparent advantage on special teams.

Their defense is called a 3-4 hybrid because there are really only three true defensive linemen on the field, but they will almost always have at least four players lined up on the line by bringing a linebacker or two up. If you look at their depth chart, you would actually think they are running a 4-3 because it lists two defensive ends, two defensive tackles and three linebackers. The catch is that one of the defensive ends is really in the mold of a linebacker.

At 6-3, 265, Terrell Turner is listed as a defensive end, but his height and weight put him right in the middle of being a linebacker and a defensive end, thus he's a "hybrid" player. Tony Washington also gets time at the position at 6-3, 262.

With this hybrid player, Oregon has the ability to disguise blitzes very well and cause a lot of confusion for the opposing offensive line. At times, they'll drop Turner/Washington into coverage and blitz a different linebacker. Sometimes they'll put as many as six guys on the line, rushing some but not all. This makes it hard for the offensive line to know who to block and they often get caught guessing.

It also can confuse the quarterback, which I'll show you below.

In this play, Oregon linebacker Dewitt Stucky intercepts Stanford quarterback Andrew Luck because of the confusion the Ducks caused at the line of scrimmage.

Let's take a look at how they lined up defensively: 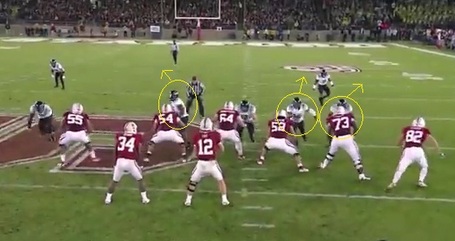 As you can see, Oregon has five guys on the line of scrimmage. Turner, the hybrid linebacker/defensive end, is the guy circled on the left. Linebackers Michael Clay (middle circle) and Stucky (right circle) are also on the line of scrimmage. But as you'll see, when the ball is snapped, all three drop into coverage and only two linemen rush the quarterback with a cornerback blitzing from the right side. 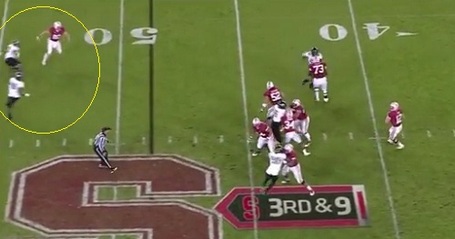 With not a whole lot of pressure, Stanford actually blocks the rush well, but Luck is confused by the coverage and it's 3rd-and-9 so he has to unload a pass. After looking left, he decides to check down to the right, where Stucky is ready to jump the pass. 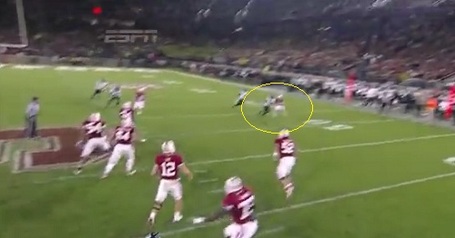 The image quality here isn't great, but Stucky successfully jumps the route and intercepts Luck's pass. He returns it 30 yards to the 20-yard line and sets up Oregon's first touchdown of the game.

This is the type of confusion the Ducks will try to inflict on Russell Wilson and the Badger offensive line. Oregon's cornerbacks aren't great and they are battling injuries so if the Badgers can figure out the coverages, Nick Toon and Jared Abbrederis could have a big day. That's a big "if" though, as I think UW's pass protection has been overrated this year. It's important for Peter Konz to play and the offensive line to perform well. Of course, Wisconsin's stellar running game should help keep the Badgers out of 3rd-and-long situations in which these defensive packages can be so dangerous.

So, Oregon scored a touchdown off this interception and that immediately leads us to special teams. The obvious disadvantage is De'Anthony Thomas vs Wisconsin's kick coverage unit, but we'll get to that in a moment. After scoring this touchdown against Stanford, the Ducks went for two. Watch for yourself:

This is the kind of trickery that Wisconsin has to watch out for and considering how the Big Ten Championship Game went (remember, Michigan State converted a two-point conversion on a fake extra point) it could be tough. Of course, remember Bret Bielema faked a punt in last year's Rose Bowl.

And then there's De'Anthony Thomas. Not much to breakdown. Just watch for yourself and try not to have nightmares leading up to the game: