By now you've probably heard a little about Oregon's "complex" offense. Over the last few days, I've spent a lot of time watching some Oregon film, spending the most time on their win over Stanford and their loss against USC.

After watching the film, I've made some general conclusions:

The offense is mainly a "zone read" spread offense. This is a term you might be familiar with because Wisconsin has seen these offenses before. Most plays start with quarterback Darron Thomas showing a handoff to the running back (usually LaMichael James or Kenjon Barner). Thomas reads the backside defensive end and makes a decision to either give the running back the ball or keep it himself.

Most of Oregon's running plays are either an "inside zone read" or an "outside zone read". The only difference is where the play is designed to go -- either inside the tackles or outside.

(Note: The running back is almost always lined up off-set to one side of the quarterback. Sometimes in power sets there will be one lined up behind Thomas, but not often.)

Below is an example of what an inside zone read typically looks like: 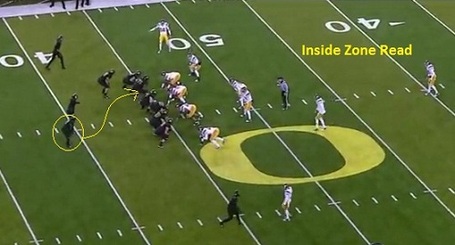 As you can see, James is off-set to Thomas' right, about a yard behind him. The side he is lined up on is called the backside, while the other side (the side the play is designed to go to) is called the play-side. If Thomas gets the ball, he'll usually run inside the left tackle. That can cause defenses to overload to that side, creating holes elsewhere. This is exactly what the Ducks want because James has the ability to shift quickly and find those holes, or Chip Kelly will run a play out of the exact same formation designed to find one of those other holes.

Here's how the actual read works: 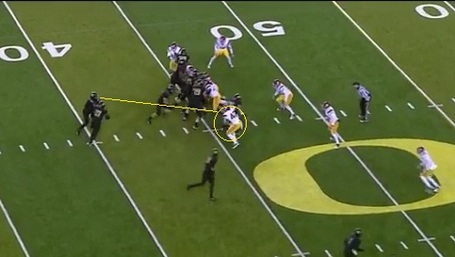 Making the correct reads is the most important job Thomas has and sometimes he struggles at this. Early in both the Stanford and USC games, he struggled with making the proper reads and the Ducks offense sputtered in the first quarter. In fact, this is a common theme for Oregon and if the Badgers can cause some confusion for Thomas early, the Wisconsin offense may be able to build an early lead.

Now let's look at the outside zone read: 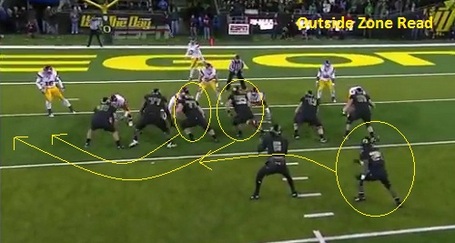 I mentioned earlier that Oregon used to show the outside zone read before the snap with a different formation, but that has mostly changed based on what I watched. You'll see above that this formation is pretty much the same as the one they used on the inside zone read above. In this case, however, Oregon will pull the center and left guard (like Wisconsin loves to do) and the running back can bounce outside the tackle for a big gain. The play above went for a touchdown.

Of course, Oregon doesn't just run the ball all day. In fact, Thomas will throw a lot. And while Oregon's offense looks a lot different than the Badgers, the Ducks use the same basic concept: run the ball to set up the pass. A lot of Oregon's passing plays will look the exact same as the two runs I showed you above: 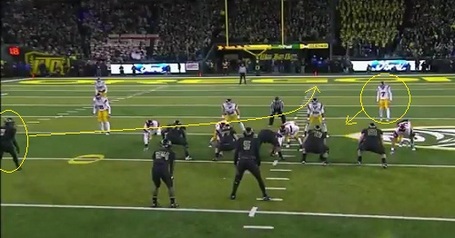 Thomas will fake the handoff to the running back and in this case, it sucked in the safety (circled) and dangerous true freshman wide receiver De'Anthony Thomas ran right up the middle of the field and was wide open for a touchdown.

This is the type of big play that should worry Badger fans. They've been pretty good against the run this season and have faired much better against option offenses than in the past, but they've had a number of coverage breakdowns leaving guys wide open. De'Anthony Thomas is a home run threat and the safeties have to keep him in front of them at all times.

What I've shown you above is just the basic idea of what Oregon runs. It's what you will see the most, but the idea of it is to set up other plays. At times you'll see two running backs in the backfield and they'll run some triple option and some power runs. They keep the defense guessing and they compound that by speeding things up and getting the defense tired.

If Wisconsin can get stops though, this plays directly into the Badgers hands. Oregon is dead last in time of possession and if UW can force three-and-outs, the Badgers can play their game and control the tempo.