Share All sharing options for: Are these Wisconsin's new Rose Bowl jerseys?

We linked to these unis in this morning's Badger Bits, but I haven't really had time today to comment on them yet.

No official announcement has been made by the Badgers, but these Rose Bowl jerseys are being sold on multiple web sites (the ones above are from Yahoo!'s fan shop) and they all have the Adidas logo on them.

And then there is this random web site called WisconsinRose.com that has a countdown to when the new jerseys will be revealed. If you are wondering what the clock is counting down to, it's Rose Bowl Media Day, where the players wear their game jerseys.

(More detailed photo after the jump.)

Something just doesn't add up here. Media day isn't until next Friday. Bret Bielema mentioned his marketing degree in Monday's press conference when he revealed Wisconsin would wear special unis, but if I'm marketing these things, I want them on store shelves as soon as possible. 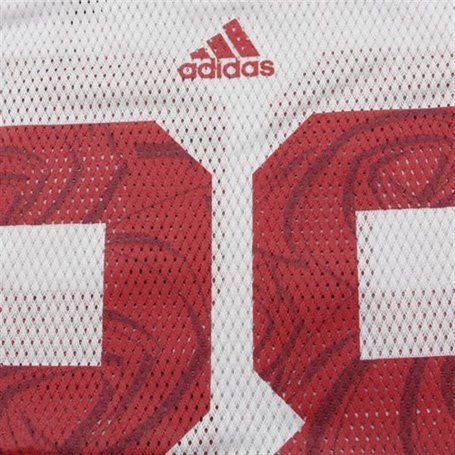 Releasing them 48 hours before kickoff isn't the best marketing strategy in my opinion.

And it's important to note that Bucky's Locker Room is not currently selling these supposed Rose Bowl jerseys online.

As for the jerseys themselves, I like them. They are simple and not over the top. Fans probably want more, but keep in mind that we haven't seen any helmets or pants yet. I have a feeling the helmet will have more obvious changes, but that's just a guess.