It's a play TCU and Wisconsin fans will be talking about for years. The Rose Bowl almost never comes down to one-play, do-or-die, but that was the case after Montee Ball scored a touchdown with two minutes left to bring the Badgers within two points of TCU. 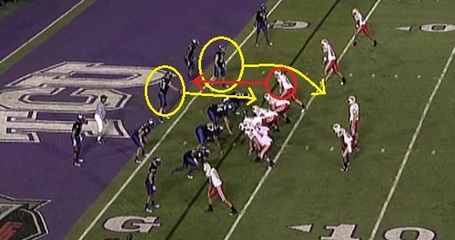 As I have written and said a number of times over the last few days, it's hard to criticize the play-call because it did get the right man open to catch the pass. But considering how the 10-play scoring drive had just played out, with John Clay punishing TCU right down the field, I don't like that he wasn't on the field for this play and I don't like that Scott Tolzien is in shotgun. Passing is fine, but at least show a running formation and use play-action.

Anyway, you are going to see TCU blitz both Tank Carder (he's circled in the middle of the field) and strong safety Colin Jones (circled on the outside). That is going to leave no one covering tight end Jacob Pedersen (circled in red).

Let's see how that plays out: 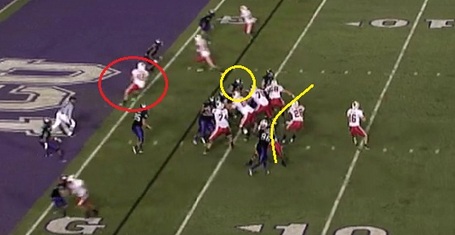 As usual, UW's offensive line does a great job giving Tolzien time to throw the football. They picked up the blitzes (Carder is circled in yellow and has been stuffed by Kevin Zeitler) and Tolzien had all day to throw the ball.

But this is where great players make plays. Carder realizes he is not going to get by UW's offensive line so he drops back a step and immediately eyes Tolzien to see if he can knock down the pass. A simple pump fake may have tied this game up for the Badgers, but it wasn't meant to be. 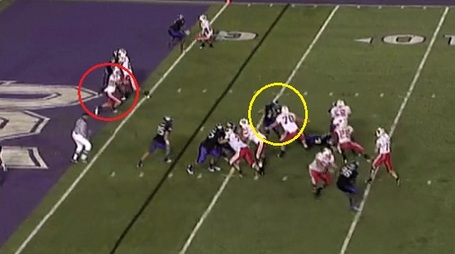 In the shot above, Tolzien has just let go of the football and Carder is starting his jump to go up and get it. Pedersen is still wide open as Lance Kendricks has locked up the defender just to his left. Carder simply makes the great play and TCU wins the football game.