Share All sharing options for: Monday Film Session: Breaking down the 'Badger Package'

Editor's Note: Yeah, yeah, we know it is Tuesday. The holiday weekend has us a day off, but I'm very pleased to bring back the Monday Film Session, a weekly feature that was very popular last season. Each week we will look back at a key play, scheme or theme in the previous game and break down why it was successful or unsuccessful. I look forward to hearing your feedback on the series throughout the season.

What a better way to start the 2010 Monday Film Session series by looking back at how the "Badger Package" was used in Saturday's 41-21 win at UNLV.

If you've missed the stories from training camp, the Badger Package is Wisconsin's new 3-3-5 defensive scheme that the Badgers will go to on third down passing situations. It was experimented with a little bit last season and fully installed in the offseason.

The advantage of using the 3-3-5 instead of a nickel defense on third down is that it leaves three linebackers on the field and instead subs a third cornerback in for a defensive tackle. It allows Wisconsin to use versatile linebacker Chris Borland on blitzes and alleviates some of the inexperience the Badgers have on the defensive line this year.

It's only one game, but the debut of the Badger Package couldn't have gone much better for Wisconsin in Las Vegas. Let's break it down.

This was UNLV's third offensive play of the game and it is an obvious passing situation on third and long. Kevin Rouse (circled in red below) comes in for starting middle linebacker Culmer St. Jean and both he and Chris Borland (circled in yellow) show blitz at the line of scrimmage where J.J. Watt, Patrick Butrym and Louis Nzegwu are the only three defensive linemen. Five defensive backs (marked with X's) are on the field and the third linebacker, Blake Sorensen, sits back in coverage. 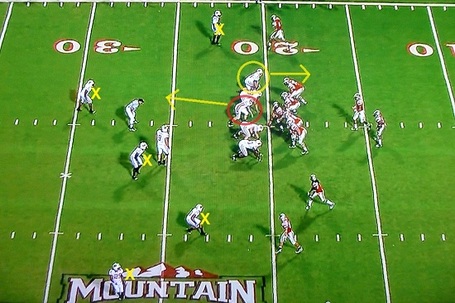 As the ball is snapped, Rouse drops back into coverage and Borland blitzes right tackle Evan Marchal (No. 73). Essentially what develops is a nickel defense with Borland as your fourth defensive lineman and seven men back in coverage. But with both Borland and Rouse showing blitz, the offensive line (and maybe more importantly the running back) have to decide where to pick up their assignments. Borland speed rushes the right tackle and puts on an athletic spin move, while the running back is looking to help elsewhere. 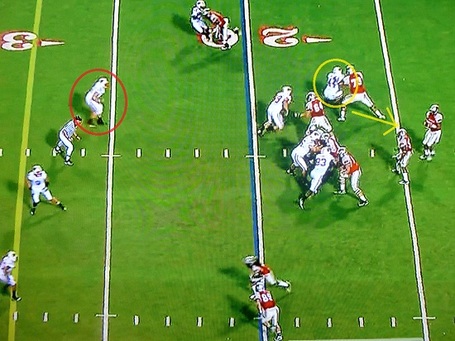 The entire pocket collapses on quarterback Mike Clausen and Borland takes him down for the sack. Notice how the entire flat is empty. With the wide receivers forced to run their routes to at least the 30-yard line where the first down marker is, Wisconsin drops back seven men completely out of the picture, only allowing a pass underneath. With no options there, Clausen has to tuck the ball and take the sack. 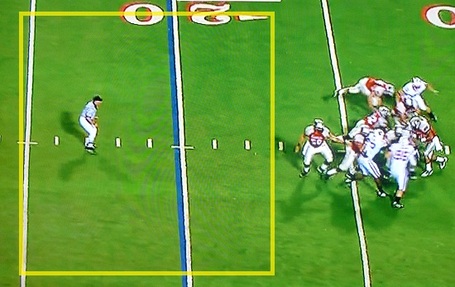 Now, the biggest reason why the Badger Package is so effective is because the Badgers have the personel to run it. But if the defense ran it exactly the same each time, it would be useless. So let's take a look at the second time UNLV had a third down in this game. This time, Borland drops back and Rouse hints at a blitz in the middle. Sorensen is also hovering around and forcing UNLV's offensive line to keep an eye on him.

Still, Borland is UW's most dangerous linebacker and UNLV has already seen what he can do so you know someone is assigned to watch him. This time, defensive coordinator Dave Doeren blitzes all three linebackers, but Rouse and Borland criss-cross, which likely messed up UNLV's assignments. What unfolds is a disaster for the Rebels. 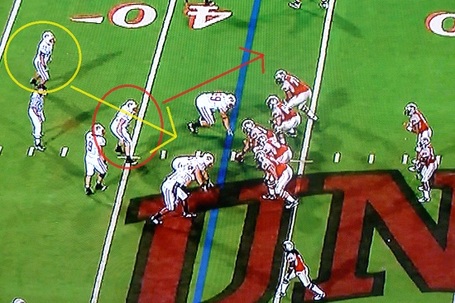 Poor Marchal. The right tackle just got stuck trying to block both Borland and Watt. Meanwhile, Borland has gone straight up the gut and the running back is forced to pick him up, leaving Rouse with a straight shot at Clausen from the weak side. Meanwhile, Wisconsin still has five defensive backs covering down field so there are zero passing options, especially when the first down marker is now 21 yards away from where Clausen has been forced to back up. Rouse catches him from behind as he flushes out to the left. The Badger Package is 2-for-2. 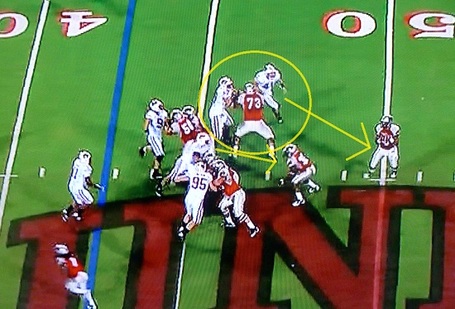 Now will the 3-3-5 be as successful against better teams? Not always. But Wisconsin doesn't always have to go to it. You won't see it on third down running situations and UW could still use a nickel on some passing plays. The Badger Package is simply a brilliant new wrinkle to a defense that struggled in passing situations last season and is working with three new starters on the defensive line.

Give Doeren a lot of credit for finding a creative way of using what he has to better maximize UW's third down performance.