Share All sharing options for: Monday Film Session: Breaking down 'The Tackle'

There's no doubt special teams was the story in UW's 20-19 win over Arizona State Saturday. Somehow, Wisconsin's special teams nearly lost the Badgers the game and yet, in the end, it also won the game.

Most of the talk after the win was about Jay Valai's blocked extra point in the fourth quarter that preserved UW's one-point lead, but I want to take a look back at a different special teams effort that was being called 'The Play" after the game.

After having already surrendered a 97-yard kickoff return for a touchdown in the first half, Arizona State's Kyle Middlebrooks nearly took another one to the house for ASU as time expired in the first half. Instead, an incredible effort by both Dezmen Southward and Shelton Johnson left Middlebrooks short of the goal-line and preserved Wisconsin's 13-10 hafltime lead.

Let's take a look at the screen right as Middlebrooks catches the ball. Can you tell me what is wrong with this picture? 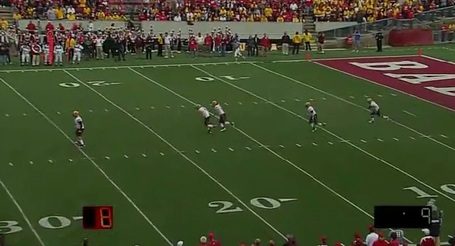 There are no red jerseys on the screen yet. Middlebrooks is already at the six-yard line and it looks like the Badgers aren't even on the field. Why is this?

As soon as Welch kicked the ball, I knew what had happened. His kickoffs are always high and relatively deep. Instead, he hit a line-drive right to Middlebrooks. It was clear that he somehow he kicked the ball wrong and a squib kick turned into a line drive in the air.

I'm no kicker so I can't tell you how this happened, but I am a golfer and I've had plenty of intended line-drive golf shots turn into squib kicks so maybe I'll give Welch a pass just this one time.

Anyway, let's take a look at how the poor kickoff affected the coverage: 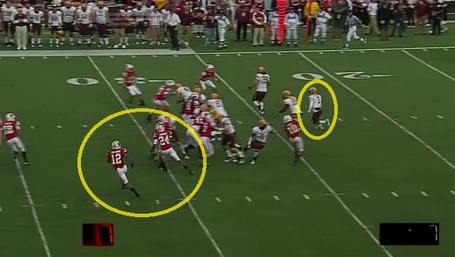 Considering you usually want to stop a returner short of the 20-yard line, it's probably not good that Middlebrooks is at the 23-yard line before the first Badger even gets to him.

Circled on the left side of the screen are Southward (No. 12) and Johnson (No. 24). Here's where the bad kickoff actually helped the Badgers. Usually when a returner runs right through the middle of the coverage like he is about to do in this picture, there's no hope of dragging him down from behind. Welch's kickoff was so short and quick that Southward and Johnson barely even got to the opposing 30-yard line before turning around. This allowed them to make a play on the back side.

Now, when this play originally unfolded, I thought it was pretty obvious that Southward should have had Middlebrooks down somewhere around the 35-yard line when he gets his hands on him. So I was surprised after the game when Bret Bielema praised both Southward and Johnson for their effort on the play.

But here's why he did so: 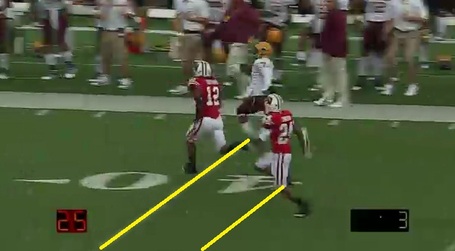 With this picture frozen, it's hard to tell that Middlebrooks is actually about to fly right past Southward. His angle at the tackle isn't nearly as good as it seems. So it's pretty impressive that Southward was actually able to slow him down at all when he got his hands on him.

How important was that?

As you look at the film, Middlebrooks and Johnson are pretty much running the same exact speed. But look at the picture above. Middlebrooks is at least a yard ahead of Johnson at the 40-yard line. Southward's effort allowed Johnson to make up that one-yard difference just in time and he was able to drag the returner down at the one-yard line.

Considering the Badgers had just taken the lead and gained the momentum right before the half, there's no telling how devastating an Arizona State touchdown could have been there.

There's a good chance we'll be looking at this play at the end of the year and reflecting on its importance.