When offensive coordinator Paul Chryst came to Wisconsin in 2005, he had two tight ends that went on to be drafted in the 2006 NFL Draft.

Owen Daniels and Jason Posciak were very talented, but their skills were not maximized until Chryst took over the offense. Ever since, the tight end has become arguably the most important position in the UW offense and this year is no different with Lance Kendricks.

While the senior tight end continues to be a threat with the football, his blocking skills surely have pushed him up on some draft boards in the last two weeks.

"What he is doing blocking-wise is as good as we've had here," head coach Bret Bielema said Monday.

It is those blocking skills that have made him even more dangerous in the offense. Tight ends like Daniels, Travis Beckum and Garrett Graham were never really known for their blocking, which made it easier for opposing defenses to cover them like a receiver. Because Kendricks stays in to block so much, it is easier to catch the opposition sleeping on Kendricks in running formations.

UW's second touchdown Saturday against San Jose State was a perfect example of that. Let's go to the tape:

The Play: 3rd-and-2 at the SJSU 14-yard line with just over 14 minutes left in the second quarter. Wisconsin leads 7-0.

It's an obvious run situation with big John Clay in the backfield. Here's the formation: 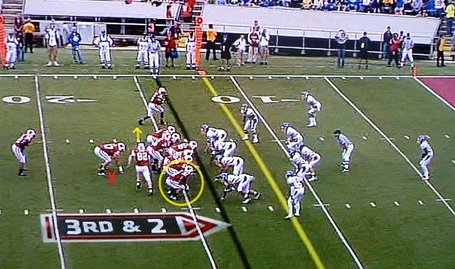 This is a 22 formation with two tight ends and two backs. Issac Anderson is the lone wide receiver split out to the left. Jake Byrne goes in motion from right to left with Kendricks (circled in yellow) now on the end to the right. San Jose State has nine guys in the box with four linebackers on the field and safety Alex Germany moving towards the line of scrimmage at the bottom of the picture. Obviously, they are thinking run.

(Side note: Later in the game, Tolzien fumbled the ball after fullback Ryan Groy brushed the ball out of his hands as he ran by him. Bielema said after the game that it was an alignment issue with Groy. They have been having problems with him lining up too close to the quarterback. This is a good example of that. I marked Groy with a red "X" here. As you can see, he needs to be about a yard closer to Clay. Byrne barely has enough room to go in motion to the left side.)

Let's continue with the play: 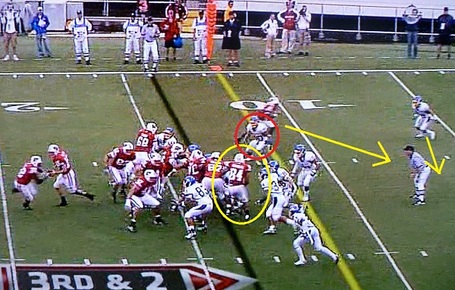 Tolzien drops back and fakes the handoff to Clay. All nine guys in the box get caught looking in the backfield and Kendricks helps sell the run by acting like he is blocking in the middle. Meanwhile, Anderson runs a crossing pattern up the middle and takes the only cornerback on the field with him. The free safety is also taken completely out of the picture with this route.

Now, the key player on defense is linebacker Tiuke Tuipulotu (circled in red). He has contain on the far side of the field and must pick up Kendricks running across the middle if it is a pass. The Badgers (and Kendricks specifically) sell the run so well that Tuipulotu gets caught wandering to the near side of the field where the run is headed. 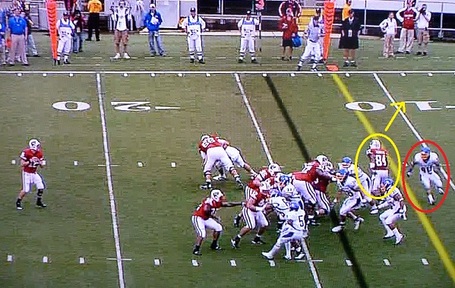 As you can see, Kendricks sneaks out of the pile of bodies in the middle and is already past Tuipulotu. Even in this zoomed out picture, you can tell this is an "oh crap" moment for the SJSU linebacker. This is the moment he realizes what is really happening.

There is no need to go further. At this point, all Tolzien needs to do is deliver the football. He does so successfully and with Anderson having already taken the corner and the free safety to the other side of the field, Kendricks can walk into the end zone for the score.

This is the prototypical example of Paul Chryst maximizing the use of his talented tight ends in a run-first-offense. It's a beautiful display of Wisconsin football.