Your Guide to Outdoor Hockey at Camp Randall Stadium

Share All sharing options for: Your Guide to Outdoor Hockey at Camp Randall Stadium 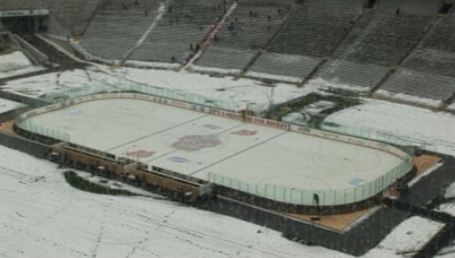 Were just one day away from the Culver's Camp Randall Hockey Classic  and things are starting to fall into place logistically. If you are headed down to Camp Randall tomorrow there are a number of questions and problems you probably have, so here's a little Q&A to guide you through the day:

The UW men's basketball team plays Michigan at 3 p.m., should we watch that game or go to the women's hockey game?

Some are calling this a hockey doubleheader, but in my mind it's a Wisconsin-Michigan basketball-hockey doubleheader. Basketball still has priority tomorrow even though the team is out of town. The men's basketball team is at a point where if they want to win the Big Ten title they pretty much need to win out (which isn't an unrealistic possibility). While the Wolverines are only 11-11 they have played well at home and this will be a very tough game for Bo Ryan's squad.

My advice is to find a place to watch the basketball game and then head over to Camp Randall when it's over. Unfortunately, that might mean missing the first few minutes of the first period.

Where should we go before the game?

This is pretty much a Football Game Day around Camp Randall. Regent Street should have its regular tailgate parties and they will most certainly have the basketball game on.

One warmer possibility is the Badger Warm-Up in the Field House, which goes from 2:30-4:30. For $20 ($10 for children) you can get all the food, beer and soda you need. But the one drawback is that you can't watch the basketball game.

Will this game sell-out?

Unfortunately, the answer is no. Mike Eaves was certain it would when they announced this game a year ago, but as of now, only 50,000 tickets have been sold. That number might rise to 60,000 before game-time, but they will fall short the record 74, 544 fans that watched Michigan and Michigan State play at Spartans Stadium in 2001.

How did they get this hockey rink in here?

My guy Adam Mertz at Madison.com tells us how two Syracuse natives started building ice rinks, including the one you will see at Camp Randall Stadium Saturday.

Will it be hard to see what is going on?

I'm not exactly sure. Friends of mine that when to Wrigley Field last year to see the Blackhawks play the Red Wings said the viewing of the rink was surprisingly good and I would think the layout at Camp Randall would make it even easier. But just in case you have trouble seeing, the Big Ten Network's broadcast of the game will be shown on the two scoreboards during the game.

And yes, Jump Around will be played -- likely inbetween the second and third intermissions.

Where do we park?

Madison.com has a story about how parking will be tricky because many of the student lawns that are used for football parking are covered with snow. Of course, there will be 20,000-30,000 less fans at Saturday's game than there are at football games so that might not be as big of a problem as many might think.

UW Communications sent this out yesterday:

PARKING
Fans that have not purchased parking passes in advance can purchase permits the day of the game in the following campus lots:

Fans can also get to Camp Randall via shuttle busses that will be running from the Alliant Energy Center and downtown ramps starting at 1 p.m. Busses will run for approximately 1 hour after the completion of the men's hockey game.

Prices for the shuttle bus are as follows:

Disabled parking permits are sold out.

It's going to be cold, what can we bring into the stadium?

Think of it as a football game. Same rules apply:

For the safety and security of all patrons, the following items are PROHIBITED, including, but not limited to: any food or beverage items, cans, bottles, coolers, thermoses, backpacks (including draw string bags), large bags (gym, duffel and tote), luggage, strollers, laser pointers, banners, flags, signs, noisemakers, weapons, balloons, beach balls or umbrellas.

Where can we stay warm?