Share All sharing options for: Fifth Quarter Recruiting: Dukan has the goods 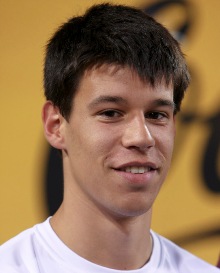 CHICAGO -- Last night I had a chance to see Wisconsin-bound recruit Duje Dukan play for the Illinois Central Suburban League North title and I came away very impressed.

Dukan, who is a sharp-shooting 6-8 winger from Deerfield High School, scored 18 points and pulled down six rebounds in a losing effort to Glenbrook North, which is coached by Dave Weber, the brother of Illinois head coach Bruce Weber. The 54-34 loss ended Deerfield's 18-game winning streak.

From everything I read about Dukan going to into the game, I expected to see a guy who shoots a lot of threes and plays more around the perimeter despite his size. But Dukan was clearly Deerfield's tallest player and it became apparent from the opening tip that the 6-8 forward was going to be playing center all game long.

Wait, you mean a center that can step back and shoot the three? No wonder Bo Ryan and assistant coach Howard Moore fell in love with this guy when they started recruiting him in October.

But at 6-8, Dukan will not be playing center for the Badgers. In fact, he told Badger Nation back in November that Moore recruited him to help replace Jason Bohannon who graduates this spring. UW will be very thin at shooting guard next season, with Rob Wilson likely starting at the 2-guard position and no clear backup in place.

From what I saw last night, Dukan is more of a small forward, but does have the ability to slash and drive with the basketball. He has incredible touch around the basket, getting most of his points Friday night on tough layups or floaters around the basket, finishing with both his left and right hands. He actually missed all four threes he took, but you could tell he was having an off-night. He has a pretty shot and it's been the deep shooting ability the scouts have been raving about, not the great touch around the basket I saw first hand Friday night.

On the negative side, Dukan appeared to get too emotional and he got rattled when his team fell behind. The kid plays hard and is clearly a leader, which is a good thing, but I didn't like how he complained about a few calls and forced some outside shots when he got frustrated. Nothing a little coaching from Bo Ryan can't fix.

The recruiting of Dukan is an interesting story. It almost didn't happen. UW appeared to be done with its 2010 class when Evan Anderson (Eau Claire North) and Josh Gasser (Port Washington) claimed the only two available scholarships with verbal commitments. But then freshman Diamond Taylor was arrested the first weekend of September and later transferred to Southern Illinois, opening the door for an extra recruit.

As of August, Dukan hardly had any offers, but his recruiting picked up in October when Wisconsin entered the race. The day before the November early signing period began, Dukan picked the Badgers over Arizona State. Still, he was relatively unknown. He wasn't ranked by any recruiting sources and was only considered a one-star recruit.

Now it appears Dukan might be another one of Bo Ryan's "steals". The 6-8 senior has come out of nowhere to contend for the coveted Illinois Mr. Basketball Award. Illinois-bound Jereme Richmond won the award last season and he appears to be the front-runner again this year, but Dukan is widely considered to be Richmond's top threat.

Considering this is an award that routinely goes to future college and NBA stars, it's safe to say Dukan is no longer a one-star recruit.

The verdict on Ryan's 2010 class was once dim when heralded Madison Memorial senior Vander Blue backed out of his verbal commitment to UW and signed with Marquette, but along with Gasser, who took Blue's scholarship, and Anderson, who is one of the top high school centers in the country, Dukan will join a class that still might be Ryan's best ever.