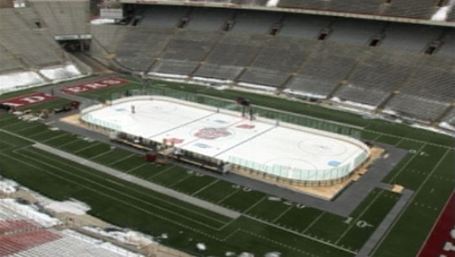 We're just five days away from the Camp Randall Classic, which will feature the UW men's and women's hockey teams playing a doubleheader Saturday in Camp Randall Stadium. The women will play Bemidji State at 2 p.m. while the men will take on Michigan at 5 p.m.

The above photo is how the rink currently looks this morning on the official live web cam at Camp Randall. After a full week of construction, the rink appears to be completely finished. I assume they will decorate the rest of the field throughout the week to make it more of a hockey atmosphere, but I'm not sure.

Around 7 p.m. Saturday night there appeared to be a legitimate chance Wisconsin could be ranked No. 1 in the nation going into this weekend's game against Michigan. I was in Oxford, Ohio watching the No. 1 Miami Ohio Redhawks in the midst of a 1-1 tie with a bad Western Michigan team late in the third period. A tie probably would have been good enough for the No. 2 Badgers to leapfrog Miami if they could complete a weekend sweep of Minnesota-Duluth. Instead, Miami scored the game-winner with four minutes left in the game and the Badgers suffered their first shutout of the season and lost 4-0.

The new rankings aren't out yet, but Wisconsin should still be in the Top Five. Michigan should also be ranked. The Wolverines were No. 20 last week and split a weekend series with Michigan State.

For more on what happened this weekend in the WCHA, check out Andy Baggot's weekly WCHA update on Madison.com. You can also see the WCHA standings here.

Finally, Baggot updates us on how successful the Classic should be. As we've been saying since the summer, it appears the attendance will be far short of a sellout, but 46,000 tickets have been sold. If the weather forecast improves and the game gets a little more hype this week, the lower bowl could be completely filled.