After watching the film from Saturday's 34-13 over Purdue, there were a lot of plays I wanted to break down.

I was particularly interested in the stunts the Boilermakers ran in the first half, some of which offensive guard John Moffitt admitted they hadn't seen on tape. Sure enough, there were some plays where it was obvious UW's linemen were confused on their assignments.

This may have been the biggest adjustment the Badgers made at halftime. The way the line turned things around in the second half is a credit to both the coaching staff and the linemen for understanding what they needed to do differently so quickly.

And then there was Montee Ball's monster 31-yard touchdown run which was both an exhibition of blocking and using your blockers to perfection. Let's break it down:

Here's how the teams line up:

The Boilermakers have nine guys in the box as the Badgers go with two tight ends and one back. Two wide receivers are lined up to the right (off the screen) with 1-on-1 coverage. The Boilers are ready for a run to the left as their linebackers are cheating over there. Purdue was ready for this play, the Badgers just executed it perfectly.

I have yet to see a college football team use their offensive linemen like the Badgers have this season. They are incredibly athletic and versatile, which allows Paul Chryst to pull tackles, guards and centers on almost every play. This example shows the versatility of all seven linemen (including the tight ends).

Jacob Pedersen (48 on the left) is going to seal the right defensive end and left tackle Gabe Carimi (68) is going to pull around him and take out safety Logan Link (35). John Moffitt (74) is going to block the defensive tackle and that allows center Peter Konz (who is circled but blocked by Scott Tolzien in this shot) to pull around to the left and make the key block to spring the run.

Before we move to the next shot, however, please take note of Moffitt, Kevin Zeitler (70), Ricky Wagner (58) and Jake Byrne (82). They are all going to do their job on the line at the start of this play, but they aren't finished. Also, don't forget about the two wide receivers (Issac Anderson and Nick Toon) who I mentioned were lined up out to the right. 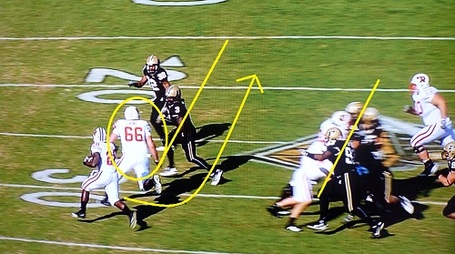 Remember how I mentioned that Purdue was ready for this play with nine defenders in the box and the linebackers cheating to the left side? Well that creates a numbers mismatch here as Konz has to block two Boilermakers. This is where Ball makes the key decision in this run. He sees that Carimi and Pedersen have created a wall on the right side so he bounces back to the right. This takes safety Albert Evans (32) out of the play as he overpursues a little towards the sideline. Konz blocks linebacker Dwayne Beckford (3) into Evans and they are both taken out.

I told you not to forget about Moffitt, Zeitler, Wagner and Byrne on the right side of the line. You can see Zeitler entering the screen on the right side and Wagner is following right behind him (off the screen). Both had assignments at the start of the play and then ran downfield to help out. Neither had anyone to block in this case, but it shows you their versatility. Now onto Moffitt and Byrne... 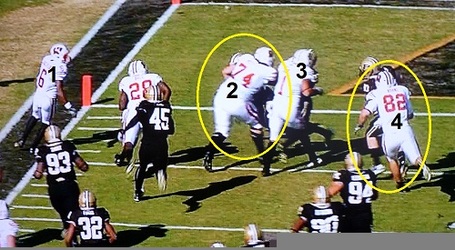 Konz, Carimi and Pedersen created a hole so big that Ball had no one around him until about the 15-yard line. That's where he caught up with a convoy of four blockers to take him the rest of the way. Sure enough, there are the two wide receivers that were lined up on the other side of the field and Moffitt and Byrne, who both had blocks at the start of the play and ran down the field to finish it off. You simply can't find many offensive guards who can run 25 yards downfield like that. And that's why Moffitt is headed to the NFL.

But what can't go unnoticed here is the decision-making by Ball. Not only did he make the key cut behind Konz earlier in the play, but if you go back and watch it on film you will noticed that he was never running very fast at any point. He was pretty much just jogging downfield and allowing his blockers to do their jobs before he took advantage of their work.

They say football is a team sport and this is the perfect example. All 11 players on the field played a part in this 31-yard touchdown run by Montee Ball.