Another Monday and another big touchdown run to break down. This time it's James White who went 61-yards untouched to give Wisconsin a 24-0 lead Saturday in the second quarter.

Maybe it's repetitive to keep breaking down how these big runs are happening, but I continue to be amazed by how easily Wisconsin's offensive linemen are getting to the second level on their blocks.

When coaches refer to the "second level" they are talking about their offensive line not only blocking the defensive linemen, but also getting blocks on the linebackers and safeties -- in this case, cornerbacks too -- because these are the blocks that spring huge runs.

That's exactly what happens on this play:

James White runs off-guard on the left side. Gabe Carimi jumps out to the sideline very quickly and seals a hole for White to run through.

This is where we talk about the next level. After snapping the ball, center Bill Nagy gets four yards deep and manages to take out one Michigan defender providing help from the right side. Another defender is forced to go around Nagy who is on the ground and before you know it, White has already gone past six Wolverines despite only gaining two yards at this point. 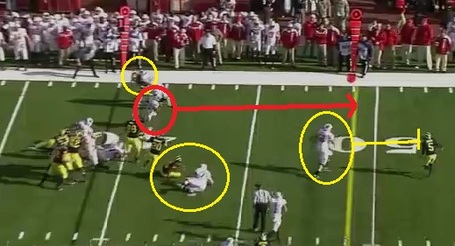 Avery has no chance here. White slows down a bit, waits for Wagner to take Avery out and then cuts back inside. Now he picks up Nick Toon who needs to spring the last block. Notice how they are only at the 50-yard line and there is only one other defender to beat. 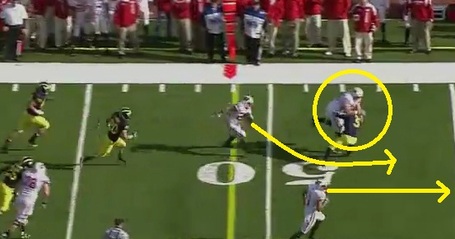 Toon locks up cornerback James Rogers around the 17-yard line and pushes him backwards all the way into the end zone as White easily goes the distance. 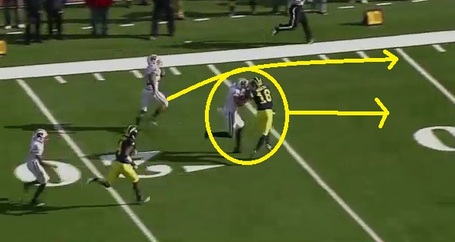 There was obviously some inexcusable defense on this play as you should never be at the 50-yard line with only two cornerbacks to beat when the play started at the 39-yard line. But a big reason why that happened is because the offensive line took nearly the entire defense out in just the first few yards of the run.

Expect to see more of this Saturday against Northwestern as Illinois running back Mikel Leshoure racked up a new school record 330 rushing yards against the Wildcats last weekend.