All right, it's time to get down to the specifics. In part I of this week's Monday Film Session we went over the entire game and tried to figure out why and how things went so wrong in Saturday's 34-24 loss at Michigan State.

But are you still wondering why the Badger Package was so ineffective? Are you wondering why Greg Jones was getting into the backfield so easily? And of course I promised you I would tell you why James White isn't ready to be UW's starting running back.

Let's go through it all as we break down the film:

The ineffectiveness of the Badger Package 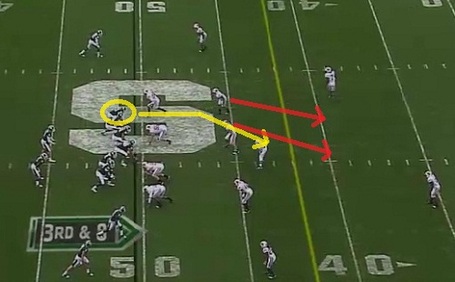 Michigan State lines up in a passing formation and Wisconsin has its Badger Package on the field, which is technically a 3-3-5, but since Chris Borland has been out they've been using defensive end David Gilbert as the primary blitzer.

MSU tight end Charlie Gantt (circled) is lined up on the left side of the line and going to run a simple post pattern to the first down line. But watch as Blake Sorensen and Devin Smith drop back way behind the first down line and open up the middle of the field for Gantt: 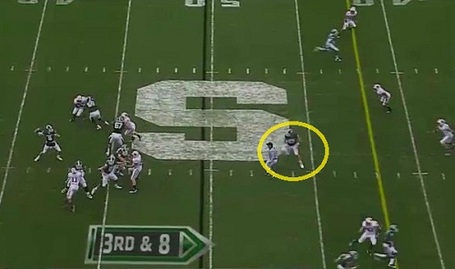 As you can see, Gantt is wide open in the middle of the field and Blake Sorensen in particular is almost completely off the screen, almost four yards beyond the first down line and still moving backwards. It's an easy pass for Cousins. 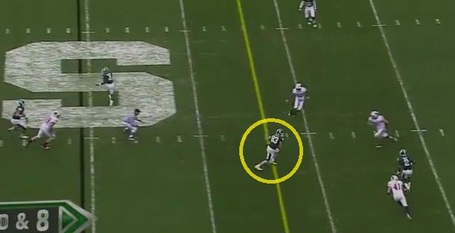 By the time Gantt catches the football, he's already at the first down line and ends up with a gain of 14 yards by the time he is brought down. Considering there was only one receiver on the far side of the field and Aaron Henry provided help on that side, it's safe to say either Sorensen or Smith blew their assignment on this play. It just doesn't make sense for both of them to drift so far behind the first down line on 3rd down without either one picking up the tight end.

Why James White isn't ready to be UW's starting running back

The Badgers have three wide receivers on the field and Kendricks in the slot on the right side. Greg Jones in showing blitz on the left side. At this point, White needs to be thinking that at the very least he needs to chip Jones if he blitzes. Carimi is going to come out for the block, but he has a tough angle against Jones' speed. White has to help. Let's see how it plays out:

As you can see, not only does White not chip Jones, but he also runs into Carimi as he tries to slide out for the block. First off, it's never okay for him to take Carimi out, but the only situation in which he can ignore Jones' blitz is if he is the first option on the play and they want Jones to blitz so Tolzien can throw the ball over him. That is certainly not the case here. 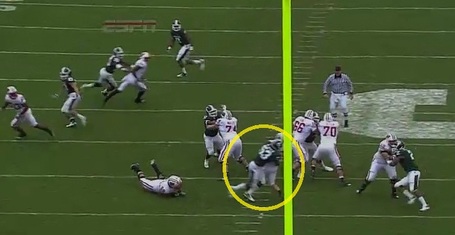 White is still covered after all of this, Carimi is lying on the ground and Jones is crushing Tolzien. Somehow he got rid of the football in White's direction, but there was no chance of completing the pass. This isn't the first time this has happened with White. I've pointed it out a few times this season. There's little doubt White has been Wisconsin's best running back so far, but he needs to do a better job of recognizing blitzes and helping out his quarterback on passing plays if he wants to be on the field for the majority of the game.

No answer for Jones 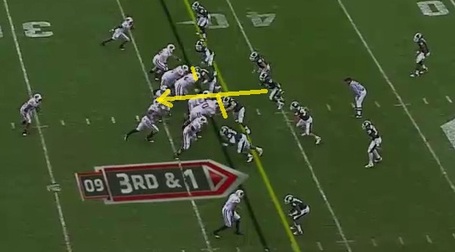 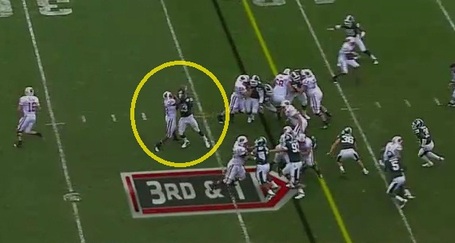 Jones is in the backfield before the handoff even takes place. That causes Clay to take his eyes off the ball and he nearly fumbles it. Luckily he holds onto it, but the Badgers lose four yards on the play and are forced to punt. What happened next?

The biggest play of the game happened. Keyshawn Martin returned the punt 74 yards to give Michigan State the lead and the Badgers never got it back.

It's one thing to have Jones beat you, but there were way too many plays where he came free into the backfield. The bottomline is that the UW coaching staff did not have the Badgers ready to play against the best linebacker in the Big Ten and that's a problem.