Monday Film Session: Breaking down the fake punt and one huge block

Share All sharing options for: Monday Film Session: Breaking down the fake punt and one huge block

Before we jump into this week's film session, I want to share a few notes I jotted down while watching Wisconsin's 31-30 win over Iowa again this morning:

We are going to look at two plays in today's film session and the first one is a ridiculous block by left tackle Gabe Carimi on UW's second touchdown of the game -- a two-yard run by John Clay on 4th-and-1. It was a gamble by Bielema to go for the first down and he ended up with a touchdown.

Before the game, Carimi told Bielema that they could run the ball to the left side all game long and he would get the job done. Obviously, he wasn't kidding because look at what he does to Iowa's stud defensive end Adrian Clayborn on this play: 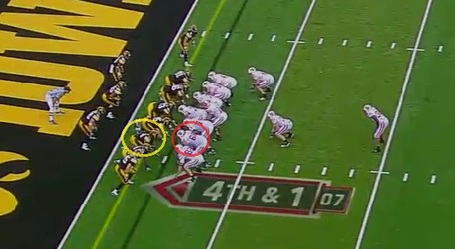 Carimi and Clayborn are lined up head-to-head here. Iowa knows there is a good chance Clay is going to run to the left side and the Badgers know Iowa is going to be ready. This is one of those plays where you just have to want it more than the other guy. 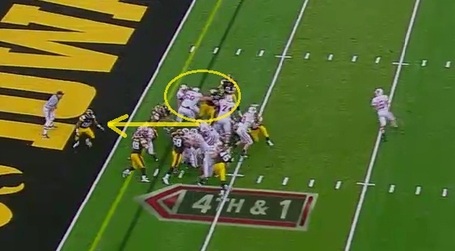 This picture really doesn't do it justice. As you can see, Carimi is all the way on the other side now and Clayborn is about to fall on his rear end. Carimi flat out drove Clayborn from one side to the other like he was a piece of paper and added the exclamation point by throwing him to the ground. UW's other blockers did their thing and Clay ran right through the hole for a touchdown.

Now let's turn our attention to the successful fake punt that sparked Wisconsin's game-winning touchdown drive. As we go through this, it's important to remember that this play was able to happen because of scouting and because the Badgers set this up with other punts Saturday and earlier in the season.

Here's how the two teams line up: 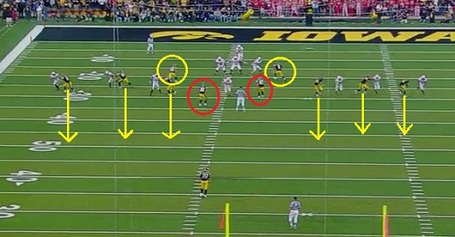 The Badgers line up with max punt coverage to the right and left which is going to force six Hawkeyes down the field and away from punter Brad Nortman. The two Iowa players circled in yellow are the only two who rush the punt at all, while the two in red are the only two who have an opportunity to recognize that it is a fake. Bielema said after the game that the fake was called as soon as he saw the personnel Iowa brought onto the field. His coaching staff knew exactly what the Hawkeyes were going to do on this punt. In other words, they knew the fake was going to work before the ball was even snapped. 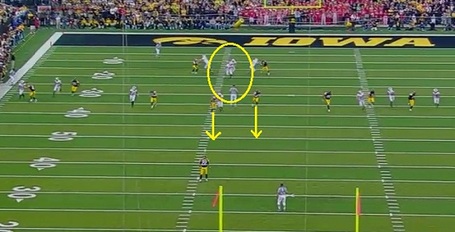 Now I mentioned that there were still two Hawkeyes that could have recognized the fake. That's where execution is key and Nortman does a great job of being patient and selling the punt. The picture above shows the exact moment when Nortman tucks the ball and starts to run. It is also the exact moment where those two Hawkeyes decide it is not a fake and start running down the field to cover. This opens up the Red Sea for Nortman to run through. Excellent execution by the entire unit to not tip the fake at all. 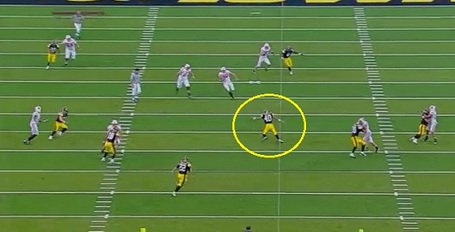 Nortman is well beyond the first down marker by the time defensive back Jack Swanson (circled) realizes the ball is not in the air and finally turns around to see what is going on. He makes the move toward Nortman and Wisconsin's punter slides in safely for a gain of 17-yards to successfully complete the gutsiest play call in Bret Bielema's career.