I wanted to be the first to say it, but UW wide receiver and Minneapolis native David Gilreath beat me to it.

He's right. I hate to be the killjoy to thousands of Gopher fans who are enjoying their first outdoor football games in the State of Minnesota since 1981, but TCF Bank Stadium is not a modern marvel that will give the Golden Gophers a distinct home-field advantage for years to come. In fact, it's just a newer, smaller version of Camp Randall Stadium circa 2003, before the south endzone was closed to make it a full bowl.

Don't get me wrong. TCF Bank Stadium is a very nice, much needed upgrade over the Metrodome. I got a chance to see the stadium a little over a month ago and it was impressive. But all the hype is about the amenities, locker rooms and the fact that it is not the Metrodump.

The reality is that TCF Bank Stadium only seats 50,000 people, it has Field Turf (just like Camp Randall) and it isn't a full bowl. The horseshoe shape allows for an impressive entranceway underneath the nation's third largest scoreboard, but that leaves only 10 rows of seats in the west end zone. If I'm an opposing team, I would love to be driving towards the west end zone late in the game. 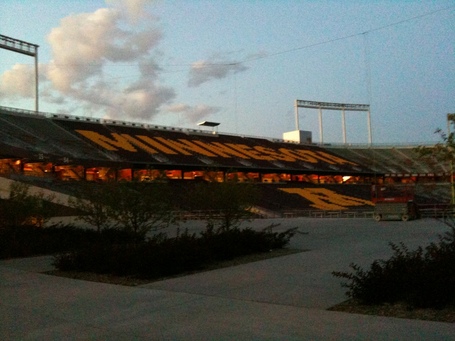 Plus, Gophers' fans aren't exactly the most rabid fans in the country. The Metrodome might be one of the worst home stadiums in the history of sports, but it does create an unbelievable home-field advantage when a sold-out crowd goes nuts and the roof keeps all that sound inside. Unfortunately, Gopher fans rarely packed the place and when the Badgers made a visit every other year, they were the team with the home-field advantage.

That's where the Gophers will get a boost. The old saying goes, "Your loss is our gain." In this case, the new stadium will shut many Badger fans out and the Gophers should enjoy not playing a road game in their own stadium.

Still, there will be plenty of Cardinal and White inside TCF Bank Stadium Saturday and I'm not convinced the Maroon and Gold can make the Badgers feel like they are in a hostile environment. It's smaller than Camp Randall and the stands were built out, not up, which would have created a more cozy, intimidating atmosphere.

Admittedly, there is a major flaw with my argument. I haven't seen the stadium during a game. I saw the empty version in August and personally, I love it. But combining what I saw in person with what I've seen on TV so far, it's just an average college football atmosphere.

And knowing that they won't be playing the Metrodump, the Badgers might enjoy it even more than the Gophers.