For the most part, I think the spread formation has been successful -- not only for Wisconsin, but for every team using the formation. Based purely on my observation, I have seen less blocked punts this season and the punter seems to have more room to kick the football.

But while UW continues to be successful using the spread punt formation, they showed Saturday that they can beat it and block a punt.

True freshman linebacker Chris Borland -- who was named the Big Ten's co-Special Teams Player of the Week Sunday -- blocked a Wofford punt in the second quarter that was recovered by David Gilbert for a touchdown. Wofford was using the same spread punt formation Wisconsin uses, but after looking at the film, there was a little difference that ended up allowing Borland to get his paw on the football.

Wisconsin is forced to punt after a short five-play drive that stalled at mid-field. Here's UW's spread punt formation on the play: 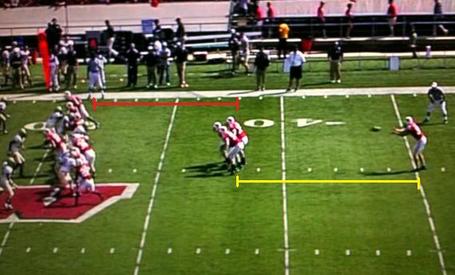 Now let's look at where the players are when Nortman actually kicks the ball: 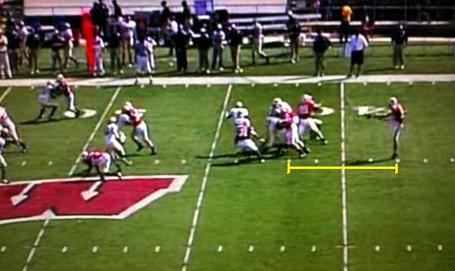 Nortman's left foot is planted at the 38-yard line when he kicks the ball, which means he has moved up three yards from where he caught the snap. The wall has stayed in tact at the 42-yard line, giving Nortman a 4-yard pocket to kick the ball.

Now let's take a look at Wofford's formation on the blocked punt. 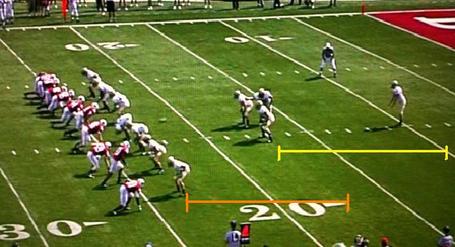 Wofford lines up the exact same way as Wisconsin. Punter Chris Tommie is 14-yards behind the line of scrimmage with the wall 7-yards away from both he and the line. Wisconsin brings the same amount of pressure as Wofford did on Nortman's kick. But here's why Borland was able to block the kick: 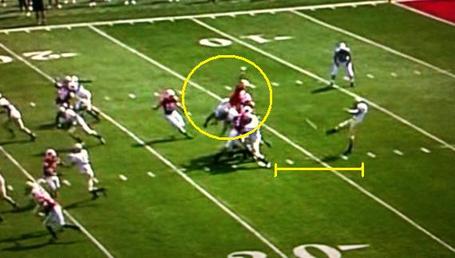 Borland (circled) makes an extremely athletic play -- literally jumping over the wall -- to block the kick. But that extra yard made all the difference. If Tommie kicks it from the 13-yard line, he likely gets the punt off clean. Instead, the Badgers get the block and Gilbert recovers the ball in the end zone to put Wisconsin up 17-0.

But this is exactly why I love the spread punt formation. Wofford's up-men are clearly overmatched physically, the punter takes an extra step and yet Wisconsin still needed a ridiculous effort from Borland to get the block.

The point is, every punt needs solid execution from the long-snapper and punter no matter what formation is used, but with even personnel on the field -- which Wisconsin will see the rest of the season -- it is very hard for the punt blockers to get anywhere near punter in this formation.

And that is exactly why the spread punt formation is here to stay.