Share All sharing options for: Monday Film Session: Positioning of the cornerbacks

I talked to a number of Badger fans after Saturday's 34-31 win over Fresno State and a lot of them were wondering why UW's cornerbacks were giving Fresno State's wide receivers large cushions on the line, particularly in the first half.

I talked to UW sophomore cornerback Aaron Henry-- who gave up four big pass plays on FSU's first scoring drive -- after the game and he said the defensive philosophy was to play back to prevent the big pass play.

"We were pretty much playing Cover-3 most of the time and a lot of times in some of the those coverages you give up the short routes so you don't get beat on some of those deeps ones," Henry said. "They nickeled and dimed us down the field and they came back down the field with the slant-go's and the double-moves and you just had to play football."

In short, it didn't work. Wisconsin gave up so many plays underneath that the corners started looking in -- even though they were still playing 10-yards off the receivers -- and that's when Devin Smithwas beat deep for a 70-yard touchdown pass and Antonio Fenelus was beat by Seyi Ajirotutu on a slant-go route for a 14-yard TD pass on 3rd & 7.

Let's take a look at two plays from Fresno State's first scoring drive that allowed the Bulldogs to take a 7-0 lead and actually setup their other two touchdowns in the first half:

Here's how Wisconsin's defense lined up: 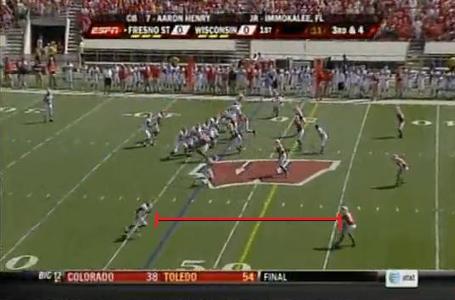 This is a perfect snapshot of how UW's corners lined up for most of the day. As you can see with the red line, Aaron Henry is playing exactly 10-yards off of FSU's Marlon Moore on a third down where the Bulldogs only need four yards. What's more, as you can see in the next picture, Henry kept moving deeper when the ball was snapped: 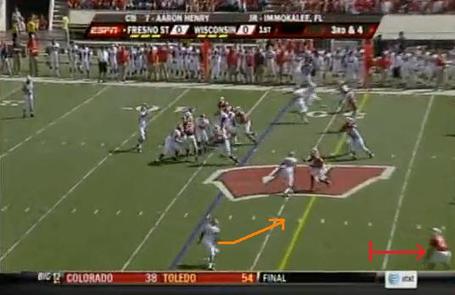 QB Ryan Colburn is already throwing the ball to Moore (any decent quarterback can see Henry's positioning before the snap) and Henry has actually moved backwards almost two yards. 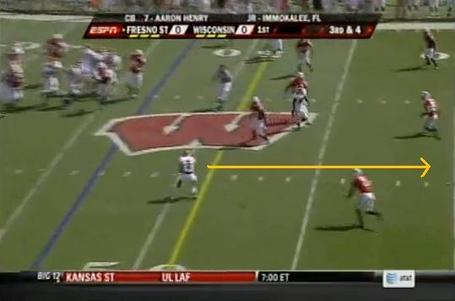 By the time Moore catches the football, he is already at the first down line while Henry is in the exact same spot because he had to stop his backwards momentum and start moving forward. Moore actually gets another 11 yards after the catch and the result is a 15-yard gain on an underneath route on 3rd and short. 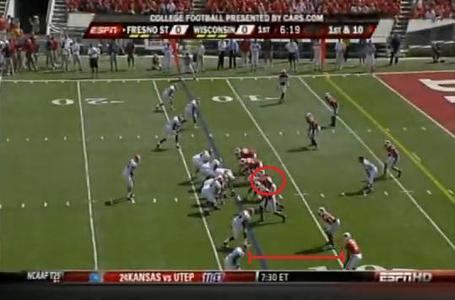 Aaron Henry has come up a little bit, giving up only a five yard cushion. The other four wideouts are giving similar coverage before the snap. But at this point, Colburn was picking on Henry. Linebacker Culmer St. Jean is circled because he is showing blitz, which leaves everyone in 1-on-1 coverage with only free safety Chris Maragos back. Now, check out how Henry actually moves backwards before the snap: 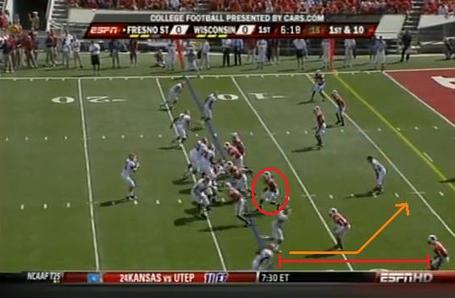 Colburn has just received the snap and Henry is now almost seven yards away from WR Chastin West and still backpedaling. Maragos has moved completely out of the picture and all the other defenders are locked in 1-on-1 coverage. Meanwhile, St. Jean (still circled) can't help because he was showing blitz. 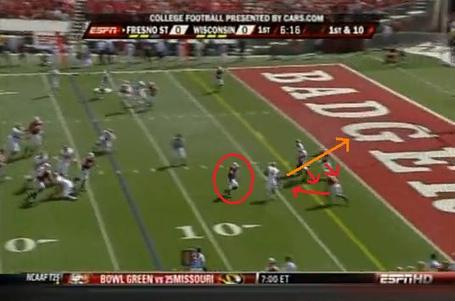 It's an easy pass and catch for Colburn and West. St. Jean can't get back in time while cornerback Devin Smith overpursues to his left because he was late to react (he was busy covering his own guy). Smith ends up screening Maragos and Henry has absolutely no chance recovering.

Now, it's only fair to mention that Henry was battling the flu Saturday and left the game after this play. But while Henry wasn't playing at full speed, he didn't really give himself a chance with his positioning before and during all four of the passes he gave up on this drive.

Henry wasn't the only corner giving up a huge cushion, FSU just picked on him because he was obviously struggling. The sophomore said after the game that the game-plan was to prevent the big plays, but the cushions allowed Fresno State to "nickel and dime" the Badgers, as Henry put it. In the end, the nickel and dime passes actually set up the next two touchdowns when the corners were starting to worry about the short routes and were still not checking the receivers at the line.

The solution? Play up on the receivers and check them at the line. Rely on the corners' physical abilities to stay with the receivers downfield and let Maragos (who's off to a great start) provide help.

Wisconsin still gave up the cushions in the second half but overall the secondary played better because the corners didn't bite on the double moves. That was a good enough band-aid to help UW win the game, but Colburn still threw for 117 yards in the second half and overtime, despite the defense only allowing 10 the rest of the game.

Of course, there's the possibility that the cornerbacks can't stay with the receivers downfield, in which case the questions about UW's secondary are validated and defense is in for a long year.