Share All sharing options for: Introducing the B5Q Mailbag!

So the good news is that we are starting to get enough e-mails to do a weekly mailbag. Unfortunately, the bad news is I only have three of them.

Start sending me your e-mails at aahoge@gmail.com and in the meantime, let's get started with our first mailbag:

Q: Camp Randall was named the best Big Ten stadium by Adam Rittenberg. I was kind of surprised by this. Even though I'm a Badger fan, I think Ohio Stadium is the best in the Big Ten. What are your top five? - Don from Middleton, Wis.

Yeah I was a little surprised that Camp Randall was Rittenberg's favorite Big Ten Stadium. but it's just one guy and everyone has their preferences. For instance, my favorite baseball stadium besides U.S. Cellular Field is Kauffman Stadium. Most people don't even know where Kauffman Stadium is (it's where the Kansas City Royals play) and most people that have been there probably wouldn't put it in their top five baseball stadiums. I'm just one guy though and it really doesn't matter what I think, much like it doesn't really matter that Rittenberg thinks Camp Randall is No. 1 in the Big Ten. Actually I found it kind of silly that the UW Athletic Department even bragged about Rittenberg's praises. Do you think they would have a story on their web site if Tom Oates said Camp Randall was his favorite? What about Michael Hunt? It's not like Bill Simmons or Rick Reilly said it -- although Reilly might because his son goes to UW. Still, Rittenberg works for the Mothership so I guess that means it's a big deal. ESPN slowly continues to take over the world.

Anyway, my top five are: 1) Michigan Stadium, 2) Camp Randall, 3) Ohio Stadium, 4) Kinnick Stadium and 5) Memorial Stadium (Illinois). Note: I have not been to Beaver Stadium, otherwise I'm sure it would probably be on this list.

Q: So your boy Obama was sporting the White Sox jacket at the All-Star Game... I'm sure it was the best moment of your life. - Chris from Madison, Wis.

I'm sure this was sent by one of my former Daily Cardinal readers who used to hate when I wrote about the White Sox, but the funny thing, Chris, is that you just gave me another opportunity to do so. Actually, I really don't understand why this was such a big deal. The guy is a White Sox fan so why wouldn't he wear a White Sox jacket to the All-Star Game? The fact that Major League Baseball wanted him to wear a neutral jacket is one of the most hypocritical things I have ever heard. Isn't the idea of being a fan of "your team" the whole point of sports and the reason why these teams make so much money? And why are Cubs fans upset that he wore a White Sox jacket? He's a Sox fan! If Obama was a Cubs fan they would have disowned him if he didn't wear a Cubs jacket.

This whole thing is ridiculous. I'm happy the President is a devoted White Sox fan and I'm glad he represented them at the All-Star game, but it really isn't that big of a deal and I'm done talking about it.

Q: I heard you on The Morning Break Friday (a Chicago radio show that airs Mon.-Fri. from 10am-Noon CT on AM 1240 and online at www.morningbreak1240.com) and couldn't help but notice you got called "soft" for being scared of Lake Michigan. You are soft! It's a lake, not an ocean! - Mike from Evanston, Ill.

Look, we all have our one fear that we probably shouldn't have (like being afraid of bees, rats and Bret Bielema's razor sharp spiky hair), but I need to clarify something here. My family owns a boat on Lake Michigan and I go out on it every week without a problem. I love boating, I never get seasick and I swim in Lake Michigan almost every time I am out there.

What I don't like is open water, especially at night and when there is a storm brewing. And there is a reason for this -- a few years back I got stuck out on Lake Michigan in a storm and this happened: 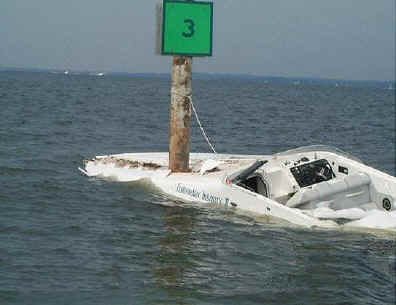 OK, that's not really my boat and I'm pretty sure that is the Gulf of Mexico, but I did get caught out in a storm and was lucky to make it back to the harbor safely. Lake Michigan is a lake, but if you don't respect it it can treat you like an ocean would. Just a few weeks ago a guy died in Lake Michigan because he dove in to save his briefcase that had fallen into the water -- and that was just in Monroe Harbor in Chicago! But that opens a new can of questions, like what the hell was in that briefcase that was worth dying over?

I hope you enjoyed the first mailbag. Remember to send your e-mails to aahoge@gmail.com and include your name and location!