The drama around MTV's new reality show "College Life" has officially hit the Badger sports world as UW sophomore defensive end J.J. Watt found himself in the middle of a love triangle during the show's second episode, which aired Monday night.

Unfortunately for Watt, it looks like he just got dumped in favor of the high school sweetheart. 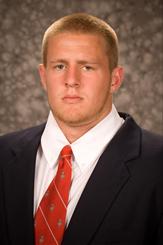 "College Life" is filmed entirely by selected UW-Madison students who were provided camcorders by MTV to film their college lives. It was only a matter of time before a UW athlete found their way onto the show and it only took Watt two episodes (actually he was discussed in the first episode, but never appeared on camera).

J.J., as he is referred to on the show, became a love interest of Andrea Endries, one of the show's main characters, who is a self-proclaimed virgin from Mukwonago, Wis. who doesn't drink alcohol.

Watt appeared in Monday night's episode in a dorm room with Andrea and some of her friends. At first it was unclear if it was actually Watt, as he had only been referred to as an athlete named J.J. who played some basketball in high school and was "too big for his moped."

But Watt's Facebook page is already filled with a number of comments by friends talking about his appearance on the show, including UW football players Brendan Kelly and Anthony Mains who jab Watt for being "too big for a moped."

But most of the Facebook chatter is about a conversation on the show in which one of Andrea's friends claimed that Watt said he wanted to "get in Andrea's pants." Watt and Andrea are already claiming on his Facebook Wall that this conversation was about a different guy:

In the interest of full disclosure (although it really doesn't matter), the name "J.J." is specifically mentioned at the beginning of that conversation on the show. You can review the tape yourself, but it is possible MTV edited it in the interest of drama and better ratings.

According to the show, the footage seen Monday night was filmed in October, although MTV's accuracy is already in question after they showed party footage from the Ohio State game in last week's episode and claimed it was from Week 2 of the school year. Wisconsin didn't play the Buckeyes until Oct. 4.

Based on his Facebook profile, Watt is clearly upset with how he was portrayed on the show (this seems to be a common theme with the cast thus far), but from what was shown in the rest of the episode, J.J.'s MTV career might be over. Andrea went back to her high school sweetheart Josh, possibly ending anything that was going to happen with Watt. Again, this apparently all happened back in October while Watt was redshirting his sophomore season.

At this point, it's probably best if his next TV appearance is Sept. 5 against Northern Illinois. In the end, Watt really didn't do anything wrong. He was actually portrayed as a pretty nice guy, except for "the conversation" he and Andrea claim was about someone else.