I love college, but not 'College'

Share All sharing options for: I love college, but not 'College'

College is great and college sports are even better, but MTV's newest reality show "College Life," which follows real freshmen at UW-Madison, completely fails at showing what its title suggests.

First, apologies to MTV for referring to "College Life" as a reality show. The producers make it clear that it's not a reality show, it's real life. That's because the cast films everything themselves with hand-held camcorders. It supposed to be real footage telling real stories of what it's like to go off to college.

After one episode, it's clear that at UW-Madison we don't go to class, we don't study, we drink non-stop and the girls only care about Gossip Girl, One Tree Hill and getting in trouble with boys.

Ain't it good to be a Badger?

There are way to many problems with this show to say it could ever be an accurate portrayal of what it's like to be a Badger. For one, the University of Wisconsin-Madison understandably does not endorse the show in any way. That right there is a problem because it limits almost all of the footage to off-campus activities. Thus, you see a lot of State Street, a lot of frat parties and nothing that actually has to do with getting a good education. 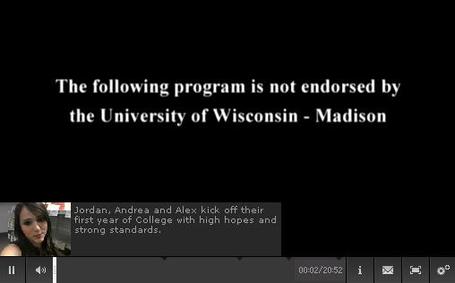 But who wants to see a girl sitting in class learning? Video of Econ 101 won't exactly get MTV its ratings. Which is exactly why "College Life" isn't real. The first episode is called "Welcome to College" yet there is only about three minutes devoted to one kid leaving home for Madison. I remember my first week at Madison. It's a week that has a huge impact on the next four years. You meet some friends that you will know the rest of your life and you explore a city you hardly know.

Here’s the show in 75 words: “Jordan is black, he mentions it, doesn’t really pay attention to it. Also hates sports. Alex likes a boy with a blurred-out name, thinks he’s so perfect. Except he’s a douche bag. Alex is done with boys. Andrea has dinner with her ex. Andrea watches “One Tree Hill” off camera. Andrea likes a boy who’s not her ex. Her ex says 15 words. Kevin drinks. Gets busted by house fellows. Drinks more. Fails Calc.”

I really can't think of anything to add. That was really the entire first episode. According to MTV, that's college life.

I give Alex, a freshman from Texas, a lot of credit. She was beat up pretty bad by the producers who put together the first episode, but she realized that she was the one who filmed the footage and decided she would film other aspects of college life in Madison. Apparently MTV didn't like that she wasn't filming fights with creepy boys at frat parties. This is from a story in today's Badger Herald:

“I take responsibility for the first episode,” Alex said. “I acted stupid, but afterward I really took my time to film.”

Although she says she knew what she was filming had an extremely low chance of being aired, she still wanted to prove to herself that she was at least trying. It would be MTV that made the choice to frame the campus a certain way, not her.

One of her most frustrating moments presented itself when she captured amazing footage of a rally at the Capitol following Obama’s victory.

“I filmed one of the most historic moments in history, and they weren’t interested,” she said.

As the majority of her film continued to be “lacking,” Alex explained she and MTV came to a mutual agreement that she would no longer be a large part of the show.

“I’m still filming now, but I already know that I’m not going to be a significant part of the series, and I’m perfectly fine with that,” she said.

She went on to say MTV had a “very manipulative sort of staff” and although she did develop a few meaningful relationships, she was not upset about being, as she puts it, “killed off after the second episode.”

So no more Alex. And I give her credit. It seems like these kids were manipulated by MTV to think they would be the next Laguna Beach reality stars that are now full-blown celebrities on the cover of People and US Weekly. Instead, MTV is only interested in the guy who almost gets kicked out of his dorm room for playing beer pong, the girl who is saving her virginity for marriage and the girl who made a mistake with a guy her first week in college.

You want to show real college life? How about you show more of the Madison game day atmosphere? They showed about 30 seconds of it in the first episode and claimed it was from Week 2 of the school year, even though it was the Ohio State game, which was played in early October. That day could have been an entire episode of REAL life in Madison, but no, they were more concerned about the kid who doesn't like sports so they showed him walking down State Street talking about how he was Jamaican, not French.

But again, some of that blame has to go to the University, because MTV clearly wasn't allowed to show anything inside Camp Randall. Too bad for Bret Bielema, because that would have been free recruiting right there.

For a UW-Madison graduate like myself (who didn't even know what channel MTV was until last week) "College Life" is almost impossible to ignore because it's our school--something we still care about deeply.

Unfortunately MTV just sees Madison as a party school, which, by the way, it is. But it's also one of the best public universities in the country and I know that my four-year college life in Madison consisted of a lot more than just partying.