Share All sharing options for: Bielema, Stone placed squarely on the hot seat 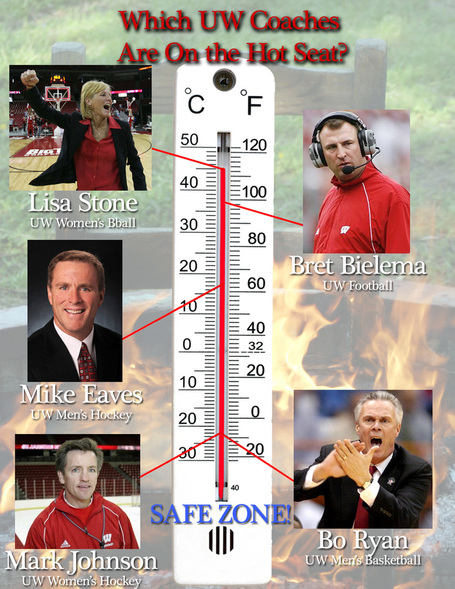 There's no way to hide the fact that most Wisconsin athletic programs failed to meet expectations this year. The most extreme case was the UW football team, which endured a disasterious 7-6 season after being ranked as high as No. 9 early in the season.

This has prompted many fans to call for Bret Bielema's job, which in turn has led to others calling Wisconsin fans spoiled after enduring one rough season after four straight New Year's Day bowl games.

But with great success comes great expectations. The UW athletic department has built itself into a national powerhouse and now it must respond to the adversity it has faced in the last seven months.

Whether Barry Alvarez likes it or not, the fans, who are the ones sending in donations and filling the seats, have placed a few coaches squarely on the hot seat.

Many fans couldn't believe Lisa Stone wasn't fired after last year's 16-14 record with a veteran team led by one of the country's best players in Jolene Anderson. The Badgers were a pre-season lock for the NCAA Tournament a year after losing in the NIT Championship game. Instead, Stone's team went backwards, barely making the NIT and bowing out to Villanova right away.

Incredibly, not only did Stone keep her job, but two months into the 2008-09 season she was a candidate for coach of the year. After losing their first game, the Badgers won 10 in a row, including a Paradise Championship victory over Baylor, a Top 10 team. It was a remarkable start for a team thought to be rebuilding. But as soon as the Big Ten season hit, the Badgers tanked. They finished with a 6-12 conference record, which included some inexcusable losses, namely a home loss to Indiana in which UW blew an 11 point lead and lost in overtime.

After a nice run to the Big Ten Tournament semifinals, UW made the NIT but again flopped in unbelievable fashion. Holding a 15-point second half lead, the Badgers lost to St. Bonaventure at home, ending a rollercoaster season which has left questions as to whether or not Stone will be around next season.

The problem is that it will take over a half million dollars just to buy out the remaining two years of her contract and then even more money to hire a new staff. That's a lot of money to invest in a program that hasn't had great success.

Possible replacement: Kathi Bennett, current UW assistant. The daughter of former men's coach Dick Bennett, Kathi was brought on in the offseason after a few years removed from the game because of a car accident. She was previously the head coach at Indiana and is overqualified as an assistant.

Our prediction: Lisa Stone is the head coach entering next season, but Bennett takes over mid-season if the Badgers struggle. If it's another mediocre season, the UW athletic department buys out the last year of Stone's contract and Bennett takes over the following season. They can't wait too long, however, or Bennett might end up as a head coach elsewhere.

The fans have placed Bielema squarely on the hot seat, but Barry Alvarez has no intentions of firing his guy. That's the key right there, Bielema was Alvarez's guy, so much so that a history professor quit the athletic board last year in protest of how Bielema was hired before the board even approved the move.

CoachesHotSeat.com has Bret Bielema at No. 6 on their Hot Seat Rankings, but that doesn't mean anything and only reflects the outcries from the fans.

But there's no doubt that the coaching was subpar last season. There were way too many penalties (especially from Bielema himself), there was a toughness issue, attitude problems and blatant coaching mistakes (like calling timeout as Michigan State was scrambling to lineup a game-winning field goal).

Possible replacement: How about Darrell Bevell? The former UW quarterback is the Minnesota Vikings offensive coordinator and has been coaching since he graduated in 1995. He's been in the NFL since 2000 when he joined the Packers.

Our prediction: Bielema's not going anywhere any time soon, but the hot seat is only going to get hotter if the Badgers don't get a lot better soon. And unfortunately, it doesn't look like the team will be any better next season. At the very least, Bielema will get to bring in one more recruiting class before any decisions are made. It better be a good one.

The hot seat has been growing warmer recently and not just because UW didn't make the NCAA Tournament this year, although that was certainly a disappointment. The reality is that Eaves only has a .500 winning percentage the last three seasons and he's done so with top talent. There's always some leniency after winning a National Championship and that is starting to wear off as UW continues to disappoint.

This past season was especially frustrating because the Badgers blew many late leads that ultimately left them sitting at home during the NCAA Tournament. Oh, and they did so with a defense that consisted of five NHL first and second round draft picks.

Possible replacement: Mark Johnson, UW women's hockey head coach. Many UW fans believe the best hockey coach at Wisconsin is coaching the women. That may or may not be the case, but the difference between Eaves and Johnson is that after both won National Championships in 2006, Johnson has won two more and Eaves has struggled just to make the NCAA Tournament.

Bo Ryan's job could only be safer because many outside Wisconsin criticize his system. But he wins games with talent less superior than many of the teams he schedules. Sure, this past season was a little bit of a down year, but that also came after he managed to win 31 games with a team that had lost its two best players.

Possible replacement: Tony Bennett, Virginia. OK, we only list this because Ryan's got to retire eventually, even if that's 10 years away. Bennett is only 39 and he just left Washington State for Virginia after some impressive years with the Cougars. It's a slightly risky move, he is one of the game's better up-and-coming coaches. Last year he turned down consideration from Indiana.

The only reason Johnson would be going anywhere was if he was taking a better job. He's the USA Women's Hockey Olympic coach and he's won three of the last four National Championships. He was also the nation's top head coach in each of those three championship seasons.

There's no reason to even consider a replacement.

So what do you think? Who's at the top of your hot seat list? And how long do you think these UW coaches will be around?