Badger Bits: An early look at the Big Ten Tournament

Share All sharing options for: Badger Bits: An early look at the Big Ten Tournament 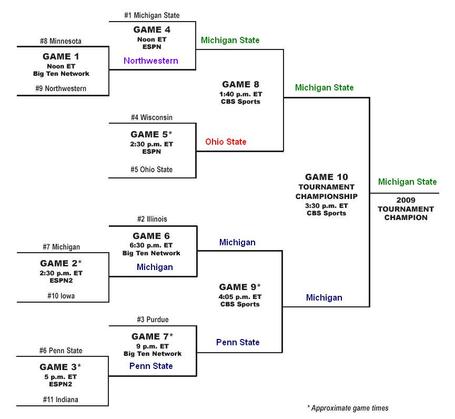 I really like how Michigan and Penn State are playing right now and I don't like how Illinois and Purdue are playing. Yeah, the Lions lost at Iowa, but the Hawkeyes are growing and that was a quick turnaround for Penn State which had used all its energy in an emotional win over Illinois less than 48 hours earlier.

I don't like Ohio State much right now, but the Badgers have dropped every critical game this season. A win and Wisconsin is almost assuredly in the NCAA Tournament. Of course the same was said about the games at Michigan State and Minnesota when the Badgers squandered late leads.

But if you're looking for someone who does like the Badgers this weekend, check out this post from Boiled Sports.

Some other news and notes: