Share All sharing options for: UW recruit stars in front of Bruce Weber

I just got back from an incredibly exciting regional semifinal between St. Ignatius and St. Patrick here in Chicago, which Ignatius won 48-46 on a runner in the lane by senior guard Dan Fahey with 2 seconds remaining.

Fahey has had conversations with the Wisconsin coaching staff about a possible walk-on role with the team next season if he elects to attend UW, but it's his teammate Nnanna Egwu who has the scholarship offer from Bo Ryan, despite only being a sophomore. 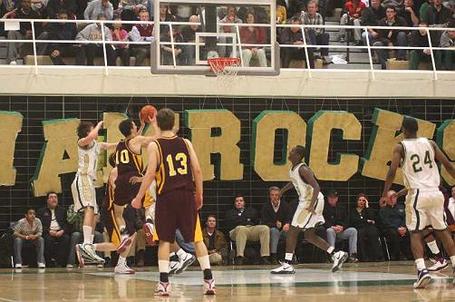 UW assistant coach Howard Moore has attended a number of Egwu's games this season, but I did not see him tonight at St. Patrick's gym among a group of college coaches that included Illinois head coach Bruce Weber.

Weber was likely there to see not only Egwu, but also De La Salle's Michael Shaw, a five-star recruit who helped the Meteors advance to the regional final in the early game. Shaw finished with 10 points and 8 blocks. St. Patrick's 6-6 sophomore Kortney Darby also made a favorable impression, but he is not being heavily recruited in a 2011 Illinois class that is ridiculously deep. Darby finished with 15 points and 8 rebounds in the losing effort.

But it was Egwu who stole the show in the fourth quarter, after struggling through the first 24 minutes of the game. Early on, Egwu's lack of experience was evident. He committed numerous turnovers and his improving jump shot was off. Then, with Ignatius down as many as 10 points in the final period, Egwu sparked Ignatius with five fourth quarter points, a few key rebounds and a free throw in the final minute that tied the game at 46 and set up Fahey's game winner.

But it was a sequence in the final minutes that stole the show and showed why the 6-9 sophomore is being recruited so heavily despite having played the game for only a few years. Off a St. Patrick's miss, Egwu couldn't quite reach the rebound, but he was able to tip it to a teammate who corralled the loose ball. He then ran the floor and came out of nowhere to dunk a missed runner by classmate Tyrone Staggers, sending the standing room only crowd into a frenzy.

It was an impressive rally by Egwu and St. Ignatius, which drew the unlucky draw of having to play its first round playoff game against St. Pat's in the Shamrocks' home gym.

Egwu and Shaw will now meet Friday in a huge regional final. De La Salle is ranked No. 3 in the Chicago Tribune, while Ignatius holds the No. 19 ranking. It's a given that many college coaches will once again be in attendance, and I'm guessing Howard Moore will be making the trip from Madison with the Badgers playing a Sunday game this weekend.

Tuesday night's clash between St. Ignatius and St. Patrick was the top preps news of the night. Here are the recaps from the Chicago Tribune and the Chicago Sun-Times: