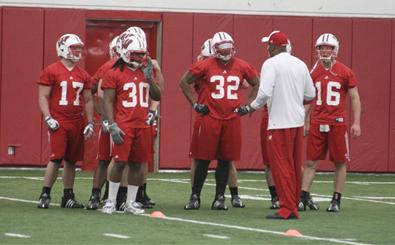 With four spring practices in the books there seems to be a lot of optimism about the renewed attitude of the UW football players and coaches.

For one, Bret Bielema admitted that he needed to make some adjustments.

"In my profession," Bielema told the Chicago Tribune, "it all starts at the top. And I've made some adjustments in terms of how I handle certain areas of the program."

Among those adjustments was moving Spring Practice back to create a winter conditioning program similar to the summer program. He also met with his entire team to get input from the players on how to improve and he pulled four guys from the program that reportedly had bad attitudes.

A replica WWE title belt was also introduced and has become a hit with the players. It encourages more competition in the weight room, which should help the lack of toughness that hurt the Badgers in close game situations last season.

Jay Valai practiced Monday for the first time this spring... Issac Anderson was held out of practice (off-season groin surgery) as a precaution... Linebacker Mike Taylor continues to slowed by a hamstring injury which has left the linebackers with only five healthy scholarship players.

The loss of P.J. Hill has unclogged the backfield, which is a good thing barring injuries. John Clay continues to impress, but he is working on pass blocking and becoming more of a receiving weapon. It appears Zach Brown is having no trouble with those skills:

Junior Zach Brown is probably the most versatile back on the roster and showed why on Monday. In addition to a couple nice runs, Brown turned heads on two different plays during 11-on-11 team drills. On one, he stayed in the backfield on a pass play and stuffed a blitzer on his way to the quarterback. Later, he leaked out of the backfield to beat a blitz with a circle route and made a shoe-top catch that turned into a big gain. -UWBadgers.com

Sophomore Bradie Ewing has made the switch to fullback, which means Erik Smith is the third string back right now.

There hasn't been a lot of news out on the quarterbacks, but Dustin Sherer and Curt Phillips spent spring break in Florida working out at a QB camp.

As the linebacking corp. thins out, the defensive line appears to be making strides, which is good news for Wisconsin. It's usually not a good thing when your No. 1 line consists of three seniors who have very little playing experience. Sophomore J.J. Watt moved to right end Monday after working out at tackle for the first three practices. That pushed redshirt freshman Brendan Kelly to the second team. Watt was joined by fellow end O'Brien Schofield, and tackles Dan Moore and Jeff Stehle.

The Badgers will be back on the field Tuesday for practice No. 5, which starts at 4:30 p.m. They will be in half-pads.