Share All sharing options for: Meet your 2009-10 Wisconsin Badgers

With Spring Football set to kick off Tuesday, it's time to put an end to the basketball season by looking ahead to next year. Here's a way too early look at next year's UW basketball team: 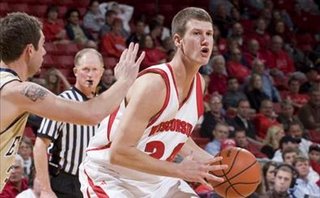 Will Tim Jarmusz crack the starting lineup next season?

G- Trevon Hughes (Sr.) - Hughes' junior season might not have been a disappointment, but it certainly was not a success. The point guard only increased his point total from 11.2 ppg in 2007-08 to 12.1 ppg in 2008-09. Many thought Hughes would be the go-to scorer Wisconsin needs so badly. He did hit two game winning shots (Virginia Tech and Florida State), but there were way more than two games where Hughes was completely absent in late game situations. If Wisconsin wants to be successful next year, Hughes will have to up his ppg game total to at least 15.

G- Jason Bohannon (Sr.) - Like Hughes, Bohannon's offensive numbers did not take off like many expected. Bohannon won the Big Ten Sixth Man of the Year award his sophomore season mainly because of a phenomenal second half that resulted in him averaging 8.2 ppg. As a junior, his shooting was extremely streaky and his ppg total only went up 2.1 ppg while shooting 75 more shots. That won't cut it. Wisconsin's guard play has to improve.

G/F- Tim Jarmusz (Jr.) - This is the one starting spot that might not be set in stone, but I would find it hard to believe that Rob Wilson will start over Jarmusz next season. He didn't take many shots as a sophomore, but he did shoot 48 percent overall and 42 percent from behind the arc. He won't be able to rebound like Krabbenhoft, but Jarmusz is a better offensive player and his passing and defense is comparable.

F- Jon Leuer (Jr.) - The key to Wisconsin's success next season probably hinges on the development of Leuer. As a sophomore, Jon Leuer looked like the Big Ten's next big star at times, but he mysteriously disappeared a lot too. He will continue to bulk up and the key will be whether or not he can improve his outside shooting.

F- Keaton Nankivil (Jr.) - If this had been Nankivil's freshman season it would have been a great one. You can't help but wish he had red-shirted his freshman season. Nankivil showed great touch around the basket early in the season and proved he could hit  jump shots and 3-pointers consistently in the second half. If he can put it all together in a full season then Nankivil should be a double-digit scorer.

Coming off the bench

G- Jordan Taylor (So.) - Taylor proved he could handle the ball in late-game situations and play good enough defense to get playing time for Bo Ryan. That says a lot. He only shot 26 percent on the season and 19 percent from behind the arc but that was likely because he was a little out of his comfort zone. This guy was a scorer in high school who consistently scored over 20 points per game. If Hughes wasn't around he would be the starting point guard and would probably make a similar leap as Hughes did between his freshman and sophomore season. In the end, Taylor might end up being a better scorer than Hughes.

G/F- Rob Wilson (So.) - Wilson has a ton of upside. He has so much upside that he could make a run at the starting small forward position. I just don't see it happening with Ryan consistently rewarding kids who work hard and play solid defense. That's why the nod goes to Jarmusz. Still, Wilson could be a Sixth Man of the Year candidate next season.

G/F- Ryan Evans (Fr.) - Known as a late-bloomer, Bo Ryan moved some scholarships around to sign this guy late late last spring. He apparently has some incredible athleticism and averaged over 18 ppg game in Phoenix as a senior. After red-shirting his freshman season, Evans brings a lot of intrigue and excitement to the table, but at this point he's still relatively unknown.

C- Jared Berggren (Fr.) - It's hard not to compare this kid to Brian Butch, especially because he ended up red-shirting his freshman season. He averaged nearly 26 points during his senior year of high school and was the top 2008 recruit. Berggren will be one of the first big guys off the bench next season.

C- Ian Markolf (So.) - Remember how Nankivil didn't red-shirt? You have to wonder why Markolf didn't red-shirt after playing a total of five minutes during his freshman season. Unfortunately that leads us to believe that he will end up being no more than a Jason Chappell, Greg Steimsma or Andres Helmigk--guys that played important roles but were never destined to be stars.

C- J.P. Gavinski (Jr.) - Most fans have given up on the Wisconsin Dells product that has played only 11 games in three years in the program. And with the young bigs that have passed Gavinski it's really hard to imagine that he will ever get in the rotation. There's just one problem: He hasn't transferred. For a guy that size to be on scholarship from the start and never get a whiff of playing time you have to wonder why he hasn't transferred. That either means he's still in the mix, he was just a total bust and knows it or he's such a big Badger fan that he figures he might as well ride it out on the scout team and get a free education. Hell, most of us would be OK with that third option if it was us.

G- Diamond Taylor (Fr.) - Taylor is a decent sized guard at 6-4 and had an up-and-down senior season after transferring to Boilngbrook, Ill. from St. Joseph's on the West Side of Chicago. With six guards ahead of him, Taylor seems like a likely red-shirt candidate at this point. But only time will tell how good he can be. If he's a go-to guy then the Badgers could use him immediately.

F- Mike Bruesewitz (Fr.) - Start the Joe Krabbenhoft comparisons now. He's 6-7, 210 and looks a lot like the departing senior. The good news is that Bruesewitz seems like a more reliable scorer than Krabbenhoft. Wisconsin will be a little undersized at the small forward position next season so if Bruesewitz comes in with size and the ability to play defense, he could see playing time sooner than later.

G- A walk-on or two to be named later