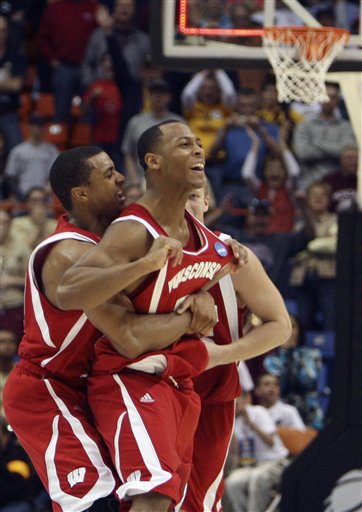 It had been a season of missed opportunities and blown leads. In seven of Wisconsin's 12 losses the Badgers had held a lead with less than three minutes to go. Other than Trevon Hughes' game winner at Virginia Tech and Jordan Taylor's three to force overtime at Iowa (UW would lose that game), the Badgers had not only missed every important shot in crunch time, but the offense had fallen into so many late game lulls that they were hardly even getting off shots.

Maybe Wisconsin just needed to be the team that didn't have the lead.

Trailing 31-19 at halftime to Florida State, the 2008-09 season looked like it was history. Wisconsin shot only 28 percent in the first half, making only 1-of-10 3-pointers. Jon Leuer was 0-for-7 from the field and 0-for-4 from beyond the arc. Hughes had only taken two shots. The imminent offensive drought came early and that was good, because it didn't come late.

The Badgers opened the second half with 13 straight points to take a 32-31 lead. Keaton "We-wish-you-had-redshirted-your-freshman-season" Nankivil scored seven of the 13 points and finished with 14.

Florida State went on its own run to regain a 44-37 lead with 9:43 to go and it was looking like the Badgers were falling into their usual offensive drought that had cost them so many times this season. In fact, they kind of did. UW hit only one field goal in the next five minutes, but the defense held Florida State scoreless during that same time period.

That's when Wisconsin's offense exploded, scoring 13 points in the next 3:10. Hughes hit a three and Jason Bohannon knocked down two more treys to give Wisconsin a 52-50 lead. Toney Douglas hit two free throws to force overtime, and hit a big three in overtime to give the Seminoles a 59-56 lead with 1:18 to go.

But once again Wisconsin stepped up in crunch time. It held FSU scoreless the rest of the way while Taylor hit a layup to bring UW within in one and Hughes hit a circus shot in the lane while getting fouled to take the lead. The free throw gave Wisconsin a 61-59 lead and that's how it ended.

No doubt the fans have to applaud Wisconsin's effort Friday night. After all of the questions about late-game execution and why the Badgers could not win a big game, they put it all together in the biggest game of the season.

Wisconsin advances to play No. 4 Xavier, which beat No. 13 Portland State earlier in the night. The game is set to tip-off at 1:20 CT Sunday.