A historical breakdown of the Big Ten Tournament

Share All sharing options for: A historical breakdown of the Big Ten Tournament

Yesterday we released our first Big Ten Tournament bracket. It was based purely on a hunch. The final version will be released Thursday morning before the first game. Today, we look at the Tournament based on what history tells us: 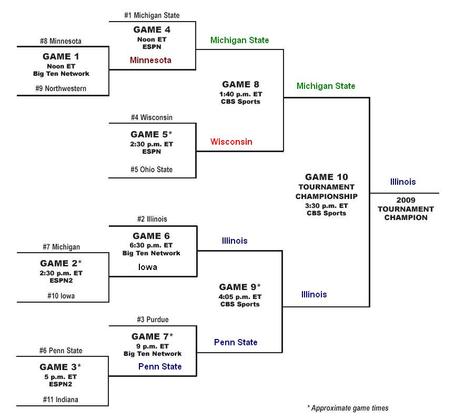 There are some remarkable historical notes regarding the Tournament. For instance, did you know:

That's just the beginning. Let's break down each team's chances of winning this year's Tournament, taking history into consideration. Keep in mind, this bracket is based purely on historical FACTS. It doesn't mean we believe these results will happen. Also, there are two sets of records because of game vacated due to NCAA violations. We are using the records that include ALL games played, not the NCAA adjusted records. And yes, we love our "historical prediction" oxymoron.

What this tells us: Recent history tells us that Michigan State is the favorite to win the Tournament, but it also tells us that the Spartans historically struggle. With a 7-4 record in its first game, MSU will reach the Semis. No. 1 seeds are 6-1 all-time in the Semis so they will advance to the Championship where they will lose to Illinois.

What this tells us: It will be hard to upset Illinois in the Quarterfinals. They are the most likely team to reach the Finals, but with a 2-4 record in the Championship game, they won't necessarily win it. It should be noted, however, that two of those Finals losses came when they were the No. 10 and No. 11 seeds. Michigan State historically struggles in the Tournament, giving Illinois the edge in the Championship game.

What this tells us: Purdue will be hard pressed to win it all. The Boilers might not even win a game. They are tied with Penn State for most winless finishes with eight.

What this tells us: Wisconsin has done very well in the Tournament lately, but the last time the Badgers were a No. 4 seed, they hardly put up a fight against No. 5 Indiana. UW is also only 1-2 against Ohio State in the Tournament.

What this tells us: The numbers don't really give us any major trends or indications as to what the Buckeyes will do. Wisconsin and Ohio State are evenly matched based on the Tournament numbers, so we'll use recent history as a tiebreaker, giving Wisconsin the win. The historical failure of No. 5 seeds also hurts the Buckeyes, especially because they were part of that failure last season.

What this tells us: A loss to Indiana in the first round is highly unlikely. A win over Purdue in the Quarterfinals is very likely. However, the run will end in the Semis because a No. 6 seed has never made the finals.

No. 7 Michigan - Historical Prediction: Lose in First Round

What this tells us: So what gives? No. 10 seeds have a 3-game advantage over No. 7 seeds but Michigan is 3-0 against Iowa in the Big Ten Tournament. Unfortunately for the Wolverines, they are only 4-4 in the first round and 0-1 as a No. 7 seed.

No. 9 Northwestern - Historical Prediction: Lose in First Round

What this tells us: It doesn't look for the Kitty Cats. They're out in the first round.

What this tells us: Like we mentioned above, No. 10 seeds historically beat No. 7 seeds, but Iowa is 0-3 against Michigan. That's pretty much a wash. But we're giving the edge to Iowa because they are 4-2 in the first round as opposed to Michigan's 4-4 record. A win over Illinois in the second round isn't likely, however.

No. 11 Indiana - Historical Prediction: Lose in First Round

What this tells us: Indiana will have a nice, short drive home Thursday night.