Share All sharing options for: Badgers lose 3 OT thriller to IU... in 1987

I just got done watching the Badgers tough triple overtime loss to Indiana from 1987, which I DVR'd last week off ESPN Classic.

A lot has changed since 1987. For one, "DVR'd" was not yet a verb (or even an abbreviation for that matter). The 3-point line was still new and the shot-clock was 45 seconds. Could you imagine Bo Ryan's offense with a 45 second shot clock?

Of course, Bo Ryan wasn't the coach. Steve Yoder was leading the Badgers and his job was in jeopardy with a 1-12 conference record after the loss. Bobby Knight was on the other bench with a team led by Steve Alford that went on to win the National Championship--IU's last men's basketball national title. 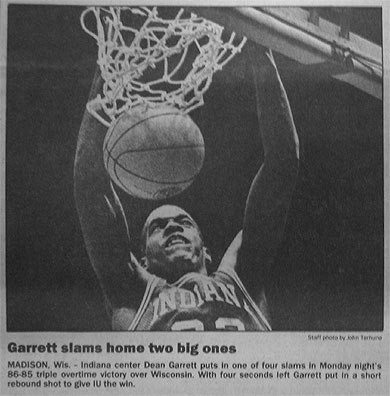 It was really an incredible effort by the Badgers who were completely overmatched but fought back every time the Hoosiers seemed to take control of the game. It took three overtimes and a bucket as time expired for IU to get rid of Wisconsin.

UW led 85-84 with 26 seconds to go, but Shelton Smith, a product of Indianapolis Central, missed two free throws and Indiana grabbed the rebound. Joe Hillman airballed a baseline jumper, but the Badgers failed to box out Dean Garrett who grabbed the rebound and converted on the put-back as time expired.

It was truly a heartbreaking loss for the Badgers who would go on to finish 4-14 in conference with a 14-17 overall record. Yoder would remain the head coach until 1992, despite never leading the Badgers to a winning Big Ten record in 10 seasons at the helm.