Monday Film Session: How UW slowed Decker in second half

Share All sharing options for: Monday Film Session: How UW slowed Decker in second half

Wisconsin knew Minnesota wide receiver Eric Decker was going to get his touches Saturday, but the defense probably wanted better than allowing him to catch eight balls for 140 yards and a touchdown.

But while Decker put up huge numbers and continued to prove he is the Big Ten's best wide receiver, the UW secondary made some very important changes late in the second quarter that made him a non-factor for nearly 30 minutes of play -- a stretch in which Wisconsin turned a 13-10 deficit into a 31-21 lead.

Decker caught his last pass of the first half with 3:47 left to play in the second quarter. Three plays later, Minnesota kicked a field goal to take a 13-10 lead. From that point until three minutes left in the game, Decker only caught one pass for five yards. Of course, he caught two passes for 58 yards in the final three minutes, but it was too little, too late.

Here are two plays that illustrate the changes the UW secondary made to make Decker a non-factor during the key 30-minute stretch in which Wisconsin out-scored Minnesota 21-8:

Here is how Minnesota lines up: 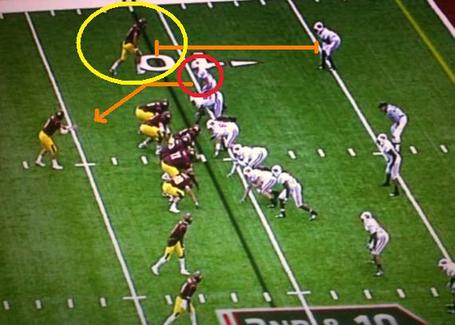 The Gophers have an empty backfield with Decker (circled in yellow) lined up to the left. Aaron Henry is in simple 1-on-1 man coverage and Mike Taylor (circled in red) is blitzing on the play.

Taylor is not picked up on the blitz, but Minnesota quarterback Adam Weber sees it immediately and throws a fade to Decker in the end zone before Taylor can get the sack. This leaves Decker on his own to make the grab and the senior wideout shows why he is the best in the conference: 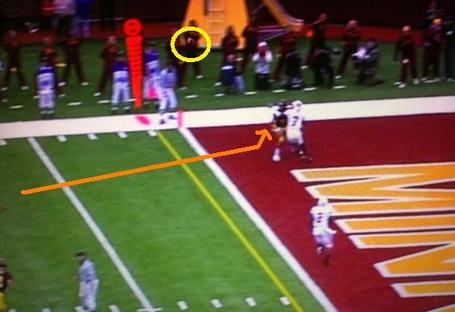 Decker is one of the best route runners in the country and he knows how to use his body to shield the corners. Here, he doesn't run straight to the sideline where he knows the ball will be. Instead, he stays three yards away from the sideline and then opens towards the cornerback, which makes it seem like the ball is coming to the inside shoulder. This is when Henry first looks up. Decker immediately pivots and closes his body to the cornerback, opening up to the sideline, which shields Henry and leaves him plenty of room along the sideline to make the catch on his outside shoulder.

Henry's coverage was actually pretty good, but Decker's route and technique prevented Henry from having a chance to make a play on the ball. Touchdown Minnesota, giving the Gophers a 10-7 lead.

Two plays before this one, Decker caught a ball in 1-on-1 man coverage for a gain of 11 yards. That gave him five catches for 77 yards and a touchdown and we weren't even to halftime yet. Knowing this is passing situation, UW defensive coordinator Dave Doeren uses a new scheme that takes Decker out of the play: 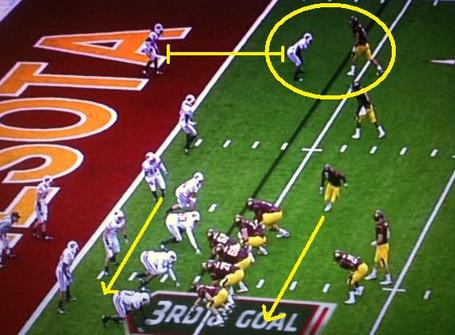 Don't get confused here. That's strong safety Jay Valai lined up at cornerback against Decker at the top of the screen. The actual cornerback -- Antonio Fenelus -- is stacked five yards behind Valai. Wide receiver Brandon Green goes in motion from right to left, taking cornerback Devin Smith with him. 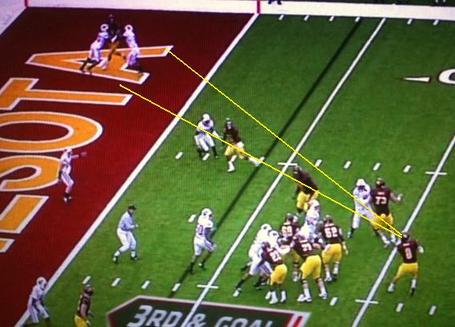 Weber drops back and looks at Decker the whole time. Valai and Fenelus have him covered like a blanket and Weber is flushed out to the left and forced to find a different option. 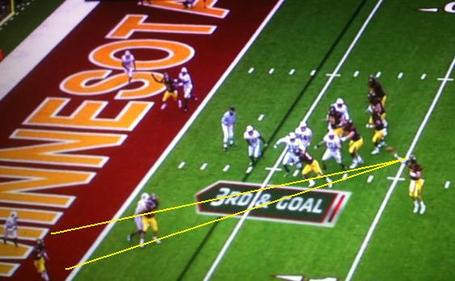 Give Weber credit. He finds Green in the front corner of the end zone and would have had the touchdown except Green couldn't hold onto the ball as he went down to get it.

This was a huge play in the game. It forced the Gophers to kick a field goal, which only gave them a 13-10 lead going into halftime. It also proved that Wisconsin had a scheme to make Decker disappear. The defense obviously didn't use it on every passing down the rest of the way, but they used it enough to disrupt the Gophers' passing game and its reliance on Decker.

The senior wideout would catch only one ball for five yards until the the three minute mark of the fourth quarter, a stretch in which Wisconsin outscored Minnesota 21-8 to take a 31-21 lead. Decker's late catches of 48 and 18 yards helped give Minnesota a chance to win the game, but ultimately UW took it 31-28.