ESPN.com has a poll up right now regarding whether people like their favorite team's recruiting class.

Only two states responded "no" to that question. 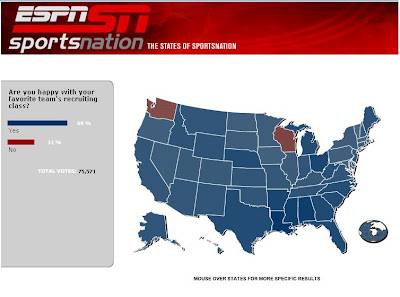 One of them, Washington, saw its two BCS teams win a combined two games this past season.

The other, Wisconsin, has seen its 12-1 program decline to 9-4 and then 7-6, and today did not see a recruiting class that inspired the majority.

The Badgers bring in Kraig Appleton, a WR in ESPN's top 150, who could be a good deep threat in the years to come.

Wisconsin also brings in the top fullback in the country, a guy at 6'4" 240 who seems to have the size it takes to be the bowling ball paving the way for John Clay in the year(s) to come.

But seriously, with a young coach, this is what the Badgers bring in?

Three players, THREE, inside the top 35 of their positions nationally?

Where there used to be height with offensive linemen recruits there is no longer height.

Where there used to be talent on defense there appears to be no talent.

That ESPN poll is essentially a check on whether fans like the direction their program is heading.

Apparently, this downslide that began in the 2007 season is getting worse, as this recruiting class shows no signs for optimism.