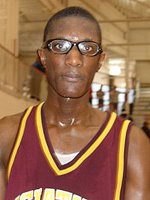 Wisconsin fans can’t help but to be intrigued by 6'9'' center Nnanna Egwu from St. Ignatius College Prep in .

Division I coaches can’t help it either.

, and are showing interest. has already offered a scholarship.

Egwu is one of three sophomores from the area to receive scholarship offers from Bo Ryan already. Devon Hodges () has already given an oral commitment, while Chasson Randle (), the most talented of the three, is still weighing his options. All three play for the Illinois Wolves AAU team.

Some rate Randle among the top three in the Illinois Class of 2011—measured by some as the deepest recruiting class in 30 years. Hodges is already the leader of a solid team. But Egwu is the unknown. He rarely starts, he never puts up huge offensive numbers, he barely plays half the game and sometimes he doesn’t play at all. Yet Egwu, a sophomore, already has a scholarship offer from Ryan. Hard to blame the fans for being intrigued.

Luckily, I happen to not only be a graduate of the , but I also claim St. Ignatius as my alma mater.

I've seen Ignatius play three times this season, including each of the last two games. Here's what I know about Nnanna: He's got a long way to go, but he's a game-changer, a difference maker and by the time he graduates high school, he will be a big-time recruit.

That is exactly why Ryan has already offered Egwu a scholarship. Assistant coach Howard Moore was at two of three games that I was at, including last week's loss to .

Unfortunately for Moore, who came down to in a snow storm, Egwu didn't even play last week. How does a 6’9" D-I recruit not play? It’s a good question, and from my estimation it has more to do with the coach rather than Egwu. I’ve been told head coach Rich Kehoe doesn’t like to use Egwu in man-to-man defenses, but last time I checked, the kid is 6’9" no matter what defense you are playing. Frankly, Egwu’s lack of playing time against Loyola was a big reason why Ignatius lost its second straight game and fell out of the rankings in both the Chicago Tribune and Chicago Sun-Times area rankings.

Sure, Egwu has his fair share of shortcomings. His feet are a little slow, his post positioning is poor at times and his shot needs work. Right now, Egwu is a defensive player. He's got a long way to go on offense. But he's only a sophomore and I've been told he's only been playing basketball for a few years.

You might be thinking to yourself, "Here we go again. Another Bo Ryan project."

Maybe. But here are some reassuring numbers. Last night he opened the game with a 10-foot jumper that gave Iggy a 2-0 lead. He only had two more field goals the rest of the game, but he had seven rebounds and six blocks. One time he reached over two of his own teammates to swat a shot about 15 feet out of bounds.

The stats aren't enough to show his potential. Last month when Ignatius upset then No. 4-ranked Marshall, Egwu didn't start (he rarely does) and jumped out to a 10-0 lead in minutes. Kehoe put Egwu in the game and Marshall, a small team that gets most of its points by driving to the basket, struggled to score the rest of the game. Nnanna blocked a number of shots and altered a handful of others. Ignatius went on to win 46-41.

January 9 was the now infamous upset loss to Loyola in which Egwu didn’t play. Numerous sources told me it was not a benching. Whatever it was, Ignatius lost. They struggled defensively for most of the game and Loyola won 54-50.

Friday night Ignatius beat Fenwick 49-39. Egwu started the game and his team led 16-3 after the first quarter. Fenwick actually scored 35 of its 39 points in the second and third quarters. Egwu happened to be sitting on the bench with two fouls during much of that time period. By the end of the third quarter, Fenwick had taken the lead. Meanwhile, Egwu played most of the fourth quarter and Fenwick only scored two points the rest of the way as Iggy won easily. Coincidence? Hardly.

Sunday Nnanna Egwu and St. Ignatius will square off against Wisconsin-signee Diamond Taylor and . Chances are Howard Moore will be in attendance once again, snow or no snow. Chances are Egwu will actually play this time. Chances are Ignatius’ chances of winning rely on that happening.