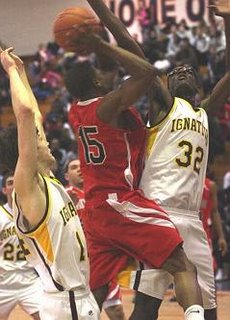 I talked to a number of people who were at the game, however, and Michael O'Brien of Chicago Sun-Times has this recap.

Not only did my alma mater Ignatius win 66-63, but Egwu, the sophomore, got the best of Taylor, the senior. Egwu scored six points, but as usual did his damage on the glass and on defense, racking up eight rebounds and six blocks. I was told that four of those blocks were on Taylor, who struggled, scoring just eight points.

O'Brien writes: "A number of college coaches were on-hand to watch Wolfpack sophomore Nnanna Egwu." My sources told me Illinois, Iowa State, Indiana and a few other schools were in attendance, but this was one of many games in the Martin Luther King Dream Classic today, which featured a number of recruits. Wisconsin assistant coach Howard Moore was not seen at the game. Again, I was not there to gather all of this information myself and it's hard to believe that Wisconsin did not have an eye on this game with Egwu playing against Taylor.

But Taylor is signed already and as I mentioned yesterday, the last time Moore came down to see Egwu, he drove down in a snow storm and the kid didn't even play. It appears as if we are past the playing time issue, however, as Nnanna started his second straight game. And a source close to the team said he will be starting for the foreseeable future.

O'Brien also writes this about Egwu: "The 6-9 center had been improving rapidly this season and is poised to join the upper-echelon of the 2011 class."